BEIJING – A trade war between China and the United States would bring disaster to the global economy,  Chinese Commerce Minister Zhong Shan has warned.

But China will not start a trade war and it will continue talks with the US, he said at a press briefing  on the sidelines of the ongoing annual parliamentary session.

“There is no winner in a trade war,” he told reporters on Sunday (March 11).

“A trade war will only bring disaster to China, the US and the global economy. China doesn’t want a trade war, and will not start a trade war first. But we can handle any challenge, and will firmly defend the interests of our nation and our people,” he said.

Fears of a trade war between the world’s No. 1 and No. 2 economies heightened last week after US President Donald Trump signed an order imposing a 25 per cent tariff on imported steel, and 10 per cent on imported aluminium.

Mr Zhong said an expert panel tasked with conducting  a comparative study of differences in trade statistics between the two countries  repeatedly found that the US’ trade deficit with China was overestimated by about 20 per cent each year. 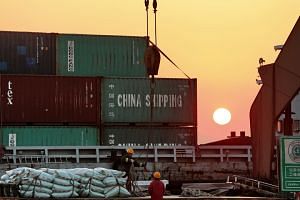 This could be further cut by 35 per cent if the US lifts the ban on high-tech exports to China, he added.

The  minister  downplayed the suspension of a high-level economic dialogue between both countries, stressing that the channels of communication have not been completely interrupted.

He  noted that China’s top economic adviser Liu He  visited the US recently and held “candid and constructive” talks with American officials on bilateral trade issues.

“We are still in talks, and we are sure that both sides will continue to talk about the next step,” he added.