Mr Xi was also re-elected president by parliament, with no votes cast against him. The body is packed with party loyalists and there was no chance he would not win the vote.

Mr Wang, 69, bowed twice and then walked over to Mr Xi, 64, to shake his hand after the vote was announced inside Beijing's Great Hall of the People. Only one person voted against Mr Wang out of the 2,970 votes cast.

Mr Xi and Mr Wang spoke only to pledge allegiance to the constitution, with Mr Wang giving the podium an emphatic tap after he finished.

Known as "the firefighter" for his central role in tackling issues like corruption and domestic financial problems over the years, Mr Wang also has experience dealing with the United States in his former role as a vice premier who led annual economic talks with Washington.

He was a major player in Mr Xi's battle against corruption, with dozens of senior officials jailed during his tenure as the top graft-fighter, including the fearsome domestic security chief Zhou Yongkang, now serving life in jail.

Mr Zhao Wanping, a delegate from the central province of Anhui, told Reuters Mr Wang's election was in line with the will of the people, pointing to his anti-corruption efforts. 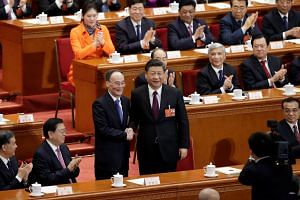 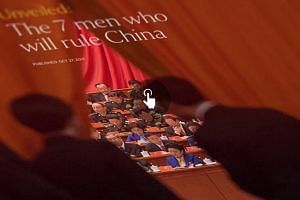 "Our country needs someone like him who will continue to step out and shoulder responsibilities for the people," he said.

Mr Wang's appointment has the potential to reshape what has traditionally been a ceremonial role. China's relationship with the United States is likely to be a key part of his remit, according to diplomats and sources with ties to the leadership.

"The vice-president position in the PRC is not a very powerful one, but it depends who fills the job," said Jean-Pierre Cabestan, a China expert at Hong Kong Baptist University, referring to the country's formal name, the People's Republic of China.

But any effort by China to elevate formal exchanges with the United States on tricky trade issues, for example from a cabinet to vice presidential level, would require the White House's consent too. Mr Wang also speaks no English.

China has been trying to head off a trade war with the United States, sending envoys to Washington in recent weeks, including Xi's top economic advisor Liu He.

US President Donald Trump is seeking to impose tariffs on up to US$60 billion of Chinese imports and will target the technology and telecommunications sectors, two people who had discussed the issue with the Trump administration said this week.

Whether Mr Xi could retain Mr Wang in a senior role despite him reaching retirement age had been seen as a key measure of Mr Xi's power and the subject of much speculation in the lead-up to this month's National People's Congress.

In January, Mr Wang, who turns 70 in July, was named a parliament delegate with the central province of Hunan despite having stepped down from the elite seven-man Politburo Standing Committee during a five-yearly leadership transition in October.

Despite holding no official senior party role, Mr Wang has taken centre stage at plenary sessions this parliament, seated immediately next to the seven members of the Standing Committee, in a clear indication of his actual status.

At the opening session where Premier Li Keqiang presented the government's work report, Mr Wang cut a relaxed figure, staring straight ahead impassively while other delegates busily read and jotted down notes.

Protocol at major political events, including seating arrangements and the order in which leaders are shown in state news bulletins, are tightly choreographed to convey a political message.

Mr Wang cast his ballot on Saturday immediately after Mr Han Zheng, the seventh-ranked and most junior Standing Committee member, drawing enthusiastic applause from the other delegates.

Mr Wang has otherwise kept a relatively low profile at parliament so far, with no state media reports of any visits to other provincial delegations to rally legislators, as members of the Standing Committee have done, including Mr Xi.

Mr Cao said Mr Wang paid particular attention to whether party cadres had sufficiently understood the spirit of the October Party Congress including "how to understand and get a handle of new areas of societal problems, the public's aspirations toward a better life, and uneven and insufficient economic development". 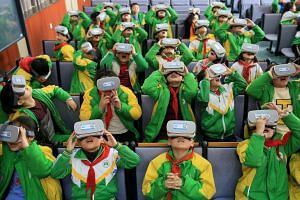