SEOUL (REUTERS) - US President Donald Trump was open to easing sanctions on North Korea provided there was a'snapback' clause if the North restarted nuclear activities, according to South Korean media reports of a North Korean statement.

The second US-North Korea summit in Hanoi broke down without resolution but North Korea has continued to speak positively about Trump.

Choe said relations between the two leaders were still good and that "the chemistry is mysteriously wonderful", according to news reports from the media conference in Pyongyang.

News reports at the time did not mention Choe saying Trump had been flexible about easing sanctions on North Korea provided there was a 'snapback' clause. There was no explanation for the apparent omission.

Trump said on Friday he decided against imposing new large-scale sanctions on North Korea over its nuclear weapons programme. 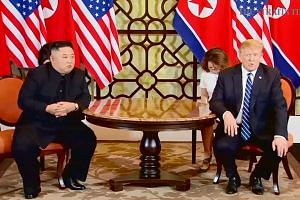 What does failure of Trump-Kim summit mean for key players in nuclear stand-off?

He has stressed since the collapse of the Feb 27-28 summit his good personal relationship with Kim. His administration has repeatedly said it was willing to reengage, although there has been no sign of direct contact between Washington and Pyongyang.

However, Choe criticised Pompeo and Bolton, with the new statement saying they had created obstacles to constructive negotiations between the two leaders "out of pre-existing hostility and mistrust". That was in line with earlier reports.

Bolton told reporters outside the White House at the time that Choe's statement was "inaccurate".

The new statement also says Kim "faced much opposition and challenges" from within North Korea in order to make the second summit happen. " ... our people, especially our military and munitions industry, are saying we must never give up nuclear capabilities", it said, according to Yonhap.

A version of this article appeared in the print edition of The Straits Times on March 26, 2019, with the headline ''. Subscribe
Topics:
More
Whatsapp Linkedin FB Messenger Telegram Reddit WeChat Pinterest Print Copy permalink