HONG KONG (BLOOMBERG) - For more than half a century, Cathay Pacific Airways has been Hong Kong's gateway to the world, its mix of British heritage and Asian high-altitude luxury bridging the city's colonial past with its Chinese location.

But it's that unique cultural blend that has ensnared the carrier in an increasingly out-of-control political uprising sweeping through the streets.

After months of anti-Beijing demonstrations in the city, Cathay is emerging as the corporate fall guy as it struggles to navigate a path between the demands of the mainland and employees sympathetic to the uprising.

Since last Friday (Aug 9), the carrier has been rebuked by China's regulator, boycotted by state-owned companies and excoriated by the nation's biggest bank. Its stock also hit a 10-year low.

Add the 272 scrubbed flights and 55,000 stranded passengers after protesters occupied Hong Kong's airport and this week has shaped into one of the worst in the carrier's history.

But those service disruptions may be the least of Cathay's worries, with China's actions against the 72-year-old carrier a taste of the less autonomous future awaiting the airline - and other Hong Kong companies.

"Cathay is only the start," said Mr Shukor Yusof, founder of aviation consultancy Endau Analytics in Malaysia. "China is sending a message to other corporations in Hong Kong that the same thing can happen to them."

The orders by China's aviation regulator last Friday laid bare the airline's vulnerabilities, and its conundrum: Staff who support illegal protests are banned from Cathay services to the mainland.

And all Cathay crew need special approval to enter Chinese airspace, a crackdown that also affects many flights heading to the United States and Europe. Though Cathay doesn't disclose a breakdown of its mainland China business, flights originating from there and Hong Kong account for about half of the firm's revenue. 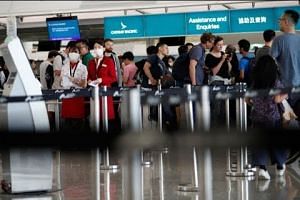 Cathay has spent the week trying to make amends. Mr Merlin Swire, chairman of the airline's biggest shareholder, went to Beijing to meet aviation officials on Monday, and Cathay said it fired two pilots who had been suspended in relation to the protests.

A Cathay representative declined to comment on the company's relationship with China, referring to a message to employees on Monday where the carrier said it was obliged to comply with regulations from the nation's aviation authorities. Cathay also said it would not tolerate illegal activities.

On Tuesday, Cathay stock tumbled to its lowest close in more than 10 years. It has rebounded somewhat since as the airline worked to undo the damage of its link to the protests, but its 6.8 per cent drop this year still puts it among the 10 worst-performing carriers on the Bloomberg World Airlines Index.

The unrest in Hong Kong initially targeted a controversial proposed extradition Bill. As the dominant local airline, Cathay was affected mostly because the protests put off tourists. But its troubles deepened after Cathay pilot and flight-crew unions took part in a general strike on Aug 5.

Days later, the Civil Aviation Administration of China (CAAC) stepped in. Cathay's actions, or lack thereof "have led to a severe threat to aviation safety, created negative social impact and increased the risk of flying from Hong Kong to the mainland", the regulator said.

On top of subjecting employees flying to the mainland to checks, the CAAC ordered Cathay to submit a plan to increase safety and tighten security by Thursday. All the information handed over by Cathay so far has met requirements, according to the regulator on Thursday.

Finance-to-brewing conglomerate China Resources National Corp was said to have given similar directions to its staff. China Citic Bank International, a Hong Kong-based unit of the nation's largest state-run conglomerate, sent a message to its workers on Wednesday, saying it was to ensure travel safety.

Then, on Tuesday, a brutally bearish research report landed on Cathay from state-run Industrial & Commercial Bank of China Ltd. Analyst Zhao Dongchen predicted Cathay stock would slump by about one third to HK$6 (S$1.06) in 12 months, a level it last reached in 2001.

Mr Zhao criticised Cathay's leaders for "poor crisis management" that would cause "irreversible damage" to the airline's brand. No other analyst comes close to Mr Zhao's depth of pessimism on Cathay, data compiled by Bloomberg show.

The political upheaval comes at an already difficult time for Cathay. The airline's leading position in Hong Kong, Asia's busiest hub for international traffic, has long been under threat from regional rivals.

A new airport in Beijing is due to open next month, potentially siphoning off more business. Throw in sluggish global economic growth, the US-China trade war and a fragile business emerging from a turnaround, and the prospects are increasingly gloomy.

But Cathay's problems aren't necessarily China's concern. The company is perhaps an obvious target for Chinese authorities as the protest movement shows no sign of stopping, said Mr Paul Yong, an analyst at DBS Bank in Singapore.

"It's really an issue of symbolism," said Mr Yong. "It's long been an icon of Hong Kong. It meant it attracted more attention from the Chinese authorities."

China and Britain have waged a war of words over the unrest in Hong Kong. The British government in June threatened "serious consequences" if China failed to honour an agreement that guarantees freedoms in Hong Kong. China, in turn, accused Britain of meddling.

For many, Cathay is an emblem of the years Hong Kong was governed by Britain, until 1997. The airline is almost half-owned by the two-century-old conglomerate headed by the UK's Swire family, while chief executive officer Rupert Hogg and chairman John Slosar are long-time Swire lieutenants. The carrier's second-largest shareholder? State-run Air China.

In some respects, Cathay appears to have given in. Though Mr Slosar said this month that the company "wouldn't dream of telling" staff what to think about issues such as Hong Kong's protest movement, the company changed its tune after drawing scrutiny from China's aviation regulator.

"We must and will comply," Mr Hogg said.