The Hong Kong International Airport was yesterday paralysed for the second day in a row when anti-government protesters returned en masse for a sit-in protest and prevented travellers from entering the departure gates, as police clashed with protesters late in the evening when they tried to extricate a trapped visitor.

Officers in riot gear used pep-per spray on protesters late yesterday in a bid to rescue a visitor suspected of being an under-cover officer.

"A visitor was assaulted and is currently being besieged by a large group of protesters at the Hong Kong International Airport. He requires immediate medical attention, but the protesters concerned have been obstructing ambulance officers from rendering medical assistance," police said in a statement before entering the airport, stressing that it was not a clearance operation.

But shortly after, protesters detained another Chinese man they suspected of being an undercover officer, restraining him with plastic cable ties to a luggage trolley.

Chanting "an eye for an eye" and "restore Hong Kong, revolution of our times", thousands of protesters had earlier resumed their occupation of the airport yesterday afternoon, resulting in the suspension of outbound flights.

Long queues were seen at check-in counters as passengers scrambled to catch rescheduled and delayed flights from Monday's airport shutdown. But the protesters' swelling numbers forced the airport authorities to announce shortly after 5pm that all check-ins had been suspended because "terminal operations... have been seriously disrupted".

Using trolleys as makeshift barricades, black-clad protesters plastered walls and floors with signs protesting what they felt were more aggressive police tactics used in the previous weekend's protest, which was the 10th continuous week that demonstrations had convulsed the territory.

In an updated travel advisory, Singapore's Ministry of Foreign Affairs said that Singaporeans travelling through Hong Kong are advised to check with their airlines or the Hong Kong International Airport website for the flight status and important announcements before proceeding to the airport.

A Singapore Airlines spokesman said that a total of 810 passengers and one infant were affected by the disruptions on Monday. All flights to and from Hong Kong were expected to operate as scheduled yesterday, he said.

However, the disruption of airport services meant passengers such as office executive Alicia Tan, 34, who was supposed to return home on SQ871 last night, were unable to board their flights despite having checked in online. 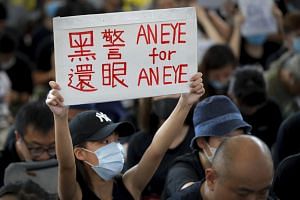 Several travellers still voiced their support for the demonstrators. Australian Mark Evans, 46, whose flight to New Delhi was delayed, said Hong Kong's youth were fighting for their future.

"They are trying to get their message across, and until the government does something, the protesters are just going to be trying new things," said Professor Evans, who heads the school of communications at University of Technology Sydney.

However, many others were less forgiving.

Mr Miguel Espinosa, 34, said this was the first time in seven years of working in Hong Kong that he was returning home to Mexico. The musician said the cancellation of his flight was a big blow as he had a series of performances lined up at home.

"I support them, but are they going to pay for me to lug my 90kg of music equipment home and back to the airport, or buy me a ticket to fly out of Shenzhen?" he asked.

Yesterday, Hong Kong leader Carrie Lam said that by attacking the city's institutions, protesters were pushing the territory "into an abyss". She appealed to demonstrators to "set aside differences and spend one minute to look at our city and our home".

Her comments came after Beijing said on Monday that Hong Kong was beginning to show "sprouts of terrorism" as protesters began to use more violent tools and tactics.