WASHINGTON (XINHUA) - The White House said on Wednesday (May 30) that the multi-track talks between Washington and Pyongyang went on well so far and it still expected a June 12 meeting between leaders of the United States and North Korea.

The US delegation, led by veteran diplomat Sung Kim, met with the North Korean officials earlier on Wednesday at the Demilitarised Zone (DMZ), and their talks will continue, said White House press secretary Sarah Sanders at a daily briefing.

Sanders also noted that the US advance team, which was in Singapore for logistics preparation for the summit between US President Donald Trump and the North Korean leader Kim Jong Un, met with a North Korean team on Wednesday and the meetings were expected to continue on Thursday.

Sanders said that the ongoing conversations were centered on the "denuclearisation of the peninsula".

"So far, the readout from these meetings has been positive, and we'll continue to move forward in them," she added.

On Tuesday, the White House announced that Kim Yong Chol, vice-chairman of North Korea's ruling Workers' Party, was traveling to New York and will meet with US Secretary of State Mike Pompeo.

Sanders revealed at the briefing that Pompeo will be headed to New York for a dinner with Kim on Wednesday night and they were expected to have a full-day meeting on Thursday.

The White House press secretary remained optimistic about the prospect of an off-again, on-again Trump-Kim meeting. 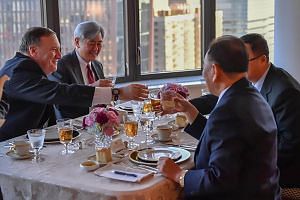 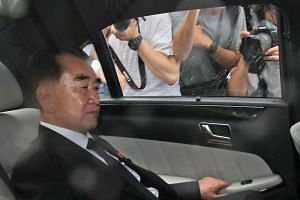 "We're going to continue to shoot for the June 12 and expect to do that," Sanders said.

The latest positive progress for the summit, originally scheduled for June 12 in Singapore, came after Trump cancelled the meeting in a letter to Kim Jong Un last Thursday, citing "tremendous anger and open hostility" displayed by Pyongyang recently.

In response to Trump's letter, North Korea's First Vice-Foreign Minister Kim Kye Gwan said early Friday that the country is ready to sit down with the United States any time in any manner for talks to solve the problems existing between them.

Trump then reversed course, saying both sides wanted the meeting to happen and it could still go ahead after productive talks. He also confirmed on Sunday that a U.S. official team had arrived in North Korea to talk about the preparation for talks.

Q: What does Secretary Pompeo need to hear from the North Koreans today at the meeting in New York for the summit to go forward?

A: We're continuing to prepare for the meeting between the President and the North Korean leader. As the President says, if it happens, we'll certainly be ready. We've got not only the meeting that you just mentioned; Secretary of State Pompeo is meeting with the President currently. And when he finishes that meeting, he'll be headed to New York for a dinner tonight, as well as a day full of meetings tomorrow.

The advance team, led by Deputy Chief of Staff Joe Hagin, met with the North Korean team in Singapore earlier today, and again expect to do so tomorrow. And we want to thank our strategic partner in Singapore, who's been incredibly generous in agreeing to host the summit. And the President is very appreciative of Prime Minister Lee for all of their efforts.

We also have reports back from the DMZ. The US delegation, led by Ambassador Sung Kim, met with North Korean officials earlier today as well. And their talks will continue. So far, the readout from these meetings has been positive, and we'll continue to move forward in them.

Q: And a follow-up. Do you think it will take place now - the summit? Or is there a denuclearisation plan taking shape?

Q: Sarah, two questions for you. First, on North Korea. In addition to their nuclear program, North Korea also maintains other weapons of mass destruction - chemical and biological weapons. Does the President intend to raise those in a summit with Kim Jong Un?

A: I'm not going to get ahead of all of the topics that may come up. The priority focus that we have discussed and that are in the ongoing conversations with the Secretary Pompeo, as well as at the DMZ, are focused on the denuclearisation of the Peninsula. But certainly, I think a number of topics are likely to be discussed at the summit.