WASHINGTON (REUTERS) - Just when it looks like North Korean leader Kim Jong Un may restart his ballistic missile testing programme, US President Donald Trump has proposed trimming the missile defence budget, as one set of deterrents is delayed by two years.

The US Missile Defence Agency - charged with developing, testing and fielding a ballistic missile defence system - will delay the expansion of the Ground-based Midcourse Defence (GMD) system by two years because of a delay in the redesign of the Raytheon Co-made "kill vehicle" the system uses.

A "kill vehicle" pops off the top of the defending missile above the Earth's atmosphere and seeks out and destroys the attacking missile's warhead.

The GMD is a network of radars, anti-ballistic missiles based in Alaska and California, and other equipment designed to protect the United States from intercontinental ballistic missiles, or ICBMs.

The expansion of the field of interceptors in Alaska from 44 ground-based interceptors, or GBIs, to 64 had been slated for completion in 2023. But the delay, due to technical issues and not connected to the cut in the agency's budget, now means that the placement of the additional 20 interceptors will not be operational until 2025, the MDA said on Tuesday (March 12).

"The important thing is to get it right, and if we're going to build more GBI's, we want to put the best kill vehicle on the top of it," said Tom Karako, a missile defence expert at the Centre for Strategic and International Studies in Washington.

At the same time, North Korea has been pushing ahead with its nuclear weapons programme after a summit meeting between Kim and Trump in Hanoi ended abruptly on Feb 28 without an agreement on denuclearisation. 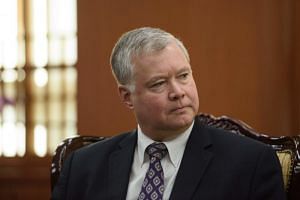 New activity has been detected at a North Korean ICBM plant, South Korean media said last Thursday, as Trump said he would be "very disappointed" if Pyongyang rebuilt a rocket site.

In the budget, the Missile Defence Agency, or MDA, saw its appropriation cut by US$1 billion (S$1.35 billion) to US$9.4 billion.

Michelle Atkinson, chief financial officer of the MDA, told reporters, "What you are seeing in '20 actually looks like a decrease, but it's really just the declining funding," as the agency comes off recent financial injections.

One Pentagon-wide effort in lasers that could be used to defeat missiles saw investment slow dramatically.

After nearly doubling just the MDA's budget for directed energy from US$109 million in 2018 to US$224 million in 2019, the Pentagon as a whole plans to invest only US$235 million in the technology in fiscal 2020.

Among other proposals included in a recently published Missile Defence Review is one involving lasers mounted on drones - aimed at stopping missiles just after take-off in what is called the boost phase.

During this portion of the flight the missile is most vulnerable, flying at its slowest speed, easily detected by the heat from its engines and incapable of evading interceptors as it accelerates to break out of the Earth's atmosphere.