The US will also continue to engage with North Korea diplomatically to see if there are opportunities to reach agreements on confidence building measures like opening liaison offices, he added.

"This will be something we would like to get done in the President's first term. But ultimately, it requires the North Koreans to start and the missing variable right now is that the North Koreans have to be similarly bought into that objective," he said at Carnegie International Nuclear Policy Conference in Washington DC.

He also made clear in his comments that the US remained wedded to its all-or-nothing approach to the denuclearisation of North Korea, as he ruled out an incremental, step-by-step approach that would see North Korea increasingly give up elements of its nuclear programmes in exchange for partial sanctions relief.

But his insistence that the US would not lift sanctions until complete denuclearisation was achieved was greeted with scepticism by the Washington audience, which pressed him repeatedly with questions on whether the Trump administration's approach was realistic and what North Korea would get in return.

"We are not going to do denuclearisation incrementally. The President has been clear on that and that is a position around which US government has complete unity. Our goal, our objective, is the final fully verified denuclearisation of North Korea," said Mr Biegun.

Asked moderator Helene Cooper of the New York Times: "If you don't do this incrementally, how can you get it all done? Why should North Korea believe that at the end of this rainbow they'll get a pot of gold?"

Mr Biegun replied that the US needed a "total solution", the philosophy that lay behind Mr Trump's rejection of Mr Kim's at the Hanoi summit to shut down North Korea's Yongbyon nuclear facility for the lifting of United Nations sanctions imposed since 2016. 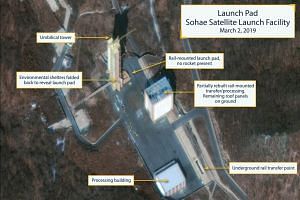 Asked what the US was willing to offer North Korea if lifting sanctions was off the table until full denuclearisation was achieved, Mr Biegun said Mr Trump had laid out a vision of a bright economic future North Korea could enjoy if denuclearised.

He added: "The President has created the space and momentum for diplomacy, the missing variable is North Korea itself has to also fully commit to the elimination of its weapons of mass destruction and affiliated programmes, and if they do that we will get to this endpoint quickly."

Addressing reports last week of increased activity at North Korea's Sohae rocket-testing facility, Mr Biegun stressed that Pyongyang had not launched any missiles and urged the audience not to read too much into the commercial satellite photographs.

"The short answer is, we don't know. What Kim Jong Un will decide to do may very much be his decision and his alone… We don't know that it's intended to send any particular statement to us," he said, adding that Mr Trump had made it clear that the US would be "very disappointed" if Pyongyang were to resume testing.