OKLAHOMA CITY (REUTERS) - The man suspected in the fatal shooting of a Southwest Airlines employee at Oklahoma City's main airport was found dead inside a vehicle hours after flights were halted and a shelter in place order was issued, police said.

Oklahoma City Police announced the discovery of the suspect in a statement on Twitter, but provided no other details.

The shooting victim, Michael Winchester, 52, was the father of football player James Winchester, a long snapper for the Kansas City Chiefs. He was shot in an airport parking lot on Tuesday (Nov 16), Oklahoma City Police Captain Paco Balderrama told reporters.

Police said no information was available about the motive for the shooting.

Suspect from Airport shooting is confirmed deceased, found inside a vehicle; name not released at this time. See Facebook for live feed.

Mr Ken Sarnoff, the agent for Mr James Winchester, announced the death of the player's father in a Twitter posting. "Our love and support is with James and the entire Winchester family," the Kansas City Chiefs said in a statement released later. 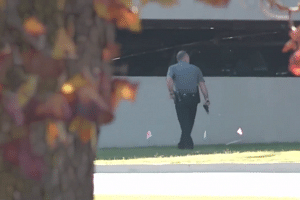 Will Rogers World Airport officials said on Twitter that the airport was "slowly resuming" operations.

Police armed with rifles swept through the airport parking lot in their search. Police said they expected the airport to be fully operational by Wednesday (Nov 16).

The airport had suspended all arrivals and departures, and Southwest said it canceled all inbound and outbound flights for the remainder of the day.

The airport is the main commercial air hub for Oklahoma City and services an average of 150 flights a day, the airport said. "We extend our heartfelt sympathies and support to his family and Southwest co-workers at this time," Southwest said in a statement.