OKLAHOMA CITY (REUTERS) - A Southwest Airlines employee was fatally shot at Oklahoma City’s main airport on Tuesday (Nov 15), prompting the authorities to halt flights and shut down the airport to allow police to search for a suspect.

No information was available about what had prompted the shooting in a parking lot at Will Rogers World Airport, Oklahoma City Police Captain Paco Balderrama told reporters.

The man killed was identified as Mr Michael Winchester, 52, police said, adding that there was not an active shooter situation at the airport.

A shooting has been reported at Will Rogers Airport. If you are headed there to catch a flight, please check with your airline.

We have confirmed one victim shot at Will Rogers Airport. Please avoid going to the airport at this time. We will keep you posted.

We have closed Will Rogers Airport at this time. If you are inside of the airport, shelter in place until advised otherwise.

“There is one suspect,” a police spokesman told reporters.

“The airport remains closed at this time as we prepare to move people out of the airport,” Oklahoma City Police said on their Twitter feed. 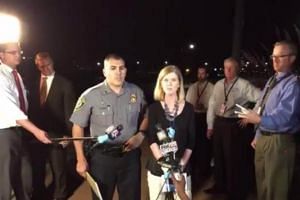 What appeared to be about a dozen police officers armed with rifles were seen patrolling on the roof of an airport parking garage on a live video feed from TV broadcaster KOCO.

Tactical teams were searching the garage for the suspect, TV station News 9 cited a police official as saying.

The airport said that all arrivals and departures had been suspended until further notice.

Southwest Airlines said it had cancelled all its inbound and outbound flights at the airport until 6pm.

The airport is the main commercial air hub for Oklahoma City and services an average of 150 flights a day, the airport said.