LONDON (NYTIMES) - Kevin Spacey's publicist has announced that the actor is seeking treatment, as reports emerged that the London theater where he had long been artistic director turned a blind eye to allegations of his sexual misconduct.

After reports this week that Spacey had assaulted Anthony Rapp when the younger actor was 14, more men have come forward accusing the Oscar-winning actor of behaving inappropriately toward them.

In a statement provided to the The New York Times on Wednesday, Spacey's publicist said: "Kevin Spacey is taking the time necessary to seek evaluation and treatment. No other information is available at this time."

Many of the accusations regarding Spacey took place when he was artistic director of the Old Vic theatre in London, a position he held for 11 years, until 2015.

The institution released a statement saying it was "deeply dismayed" by the allegations, adding that it had set up an email address for anyone who has worked there to make a confidential complaint about inappropriate behaviour by Spacey or anyone else.

Former employees of the Old Vic have come forward to say that the theater had known about Spacey's improper behavior at the time, but had turned a blind eye.

"We were all involved in keeping it quiet," a former employee told The Guardian newspaper. "I witnessed him groping men many times in all sorts of different situations." 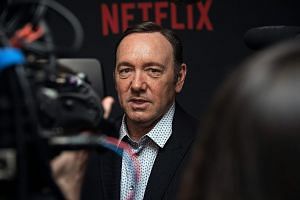 A spokeswoman for the Old Vic refused repeated requests for an interview.

On Sunday, the "Star Trek: Discovery" actor Rapp told BuzzFeed News that Spacey had invited him to a party at his apartment in 1986, where he had made unwanted sexual advances.

Rapp said that after the other guests had left, Spacey, who appeared intoxicated, took him into his bedroom, and lay on top of him.

In a statement that has been widely criticised, Spacey said he was "horrified" by the accusations and did not remember the incident.

"But if I did behave then as he describes," he said, "I owe him the sincerest apology for what would have been deeply inappropriate drunken behaviour." The day after that apology, Netflix announced it was cancelling the next season of "House of Cards," in which Spacey starred.

On Wednesday, another man came forward, saying that when he was a teenager, Spacey had lain on him while he was sleeping. Speaking via a video link in which his face was not visible, the man told the Victoria Derbyshire of the BBC that the episode had occurred in the 1980s in New York.

The man said that when he was 17, Spacey had invited him to spend the weekend in New York. He said that Spacey had asked him to share his bed, but that he had declined and slept on the sofa. He then described waking up in the morning to find Spacey's arms around him.

"I was uncomfortable, at best, traumatised at worst," he said.

In a statement posted on Facebook, Roberto Cavazos, a Mexican actor, said that Spacey routinely made unwanted advances toward young men.

"It seems that it only took a male under 30 to make Mr Spacey feel free to touch us," he said.

He also said that Spacey was often seen in the Old Vic's bar, "squeezing whoever caught his attention." Cavazos went on to describe his own experience with Spacey: "I myself had a couple of unpleasant encounters with Spacey that were on the edge of being called harassment."