"It seems the only requirement was to be a male under the age of 30 for Mr Spacey to feel free to touch us," he wrote in a Facebook post.

He said Rapp - the American actor who accuses Spacey of making a "sexual advance" when he was 14 and Spacey was 26 - was far from alone.

"Those of us who crossed paths with (Spacey) in London when he was director of the Old Vic know a whole lot more people will find the courage to tell their stories in the coming days and weeks," he said.

"It wouldn't surprise me if there were similar numbers to Weinstein's," he added, referring to the dozens of women who have accused Hollywood mogul Harvey Weinstein of sexual assault and harassment, unleashing a torrent of similar accusations against a growing list of rich and powerful men. 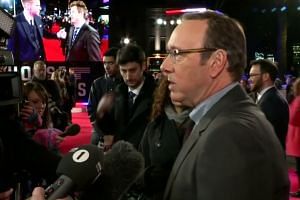 Cavazos, 35, is a stage and screen actor whose credits include the films Rush and El Beso and a guest appearance on the British TV series Doctor Who.

According to his profile, he acted in three plays at the Old Vic during Spacey's tenure as artistic director, from 2004 to 2015.

He said he fended off two "unpleasant" advances from Spacey that "bordered on harassment", but that others were afraid to do so.

"I can't even remember how many people told me the same story: Spacey invited them to meet with him to 'talk about their careers'. When they arrived at the theatre, he had prepared a champagne picnic on the stage, beautifully lit," he wrote, in allegations first posted to Facebook on Monday and repeated on Tuesday on Twitter.

"Each story varied in how far the picnic went, but the technique was the same. More commonly, he could be found in the theatre bar, pressing up against whoever caught his eye. That's how it was with me the second time. I never gave in, but I know some people who were too scared to stop him."

Cavazos did not say when the alleged encounters took place.

He said such harassment is widespread in the theatre world.

The Old Vic on Tuesday said it was "deeply dismayed" by the allegations against Spacey and encouraged anyone with stories of abuse to contact the theatre via a confidential e-mail address.

Spacey, most recently star of the Netflix series House of Cards, has apologised to Rapp on Twitter and come out as gay - drawing fierce criticism from some who accuse him of trying to deflect attention from his alleged behaviour.