COLORADO SPRINGS, Colorado (REUTERS) - US Defence Secretary Jim Mattis said on Thursday (Nov 16) there could be an opportunity for talks between North Korea and the United States if Pyongyang stopped testing and developing its nuclear and missile programmes.

“So long as they stop testing, stop developing, they don’t export their weapons, there would be opportunity for talks,” Mattis told reporters on a military plane.

While Washington has said that all options, including military, are on the table in dealing with North Korea, it has stressed its preference is for a diplomatic solution.

Visiting Seoul last week, US President Donald Trump warned North Korea he was prepared to use the full range of American military power to stop any attack, but also urged Pyongyang to “make a deal.”

Trump, who had previously called negotiations with North Korea a waste of time, has offered no clear path to talks. Pyongyang has made clear it has little interest in negotiations, at least until it has developed a nuclear-tipped missile capable of hitting the US mainland.

The last North Korean missile test was carried out almost two months ago, but US officials say they have seen no signs that Pyongyang has stopped development.

Mattis said the US military was closely watching why there had been no missile launches recently, but declined to give potential reasons for it. 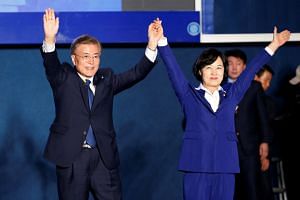 There are concerns in South Korea that any potential US strikes against North Korea’s nuclear and missile programmes could provoke devastating North Korean retaliation against South Korea.

Earlier this week, a senior South Korean official said Trump should “under no circumstances” take military action against North Korea without the consent of the government in Seoul.

In Colorado, Mattis will visit the US Northern Command and the North American Aerospace Defence Command (Norad), which are responsible for homeland defence, including tracking and potentially intercepting North Korean missiles.