WASHINGTON (REUTERS) - US President Donald Trump should "under no circumstances" take military action against North Korea without the consent of the government in Seoul, the chairwoman of South Korea's ruling party, Choo Mi-ae, said on Wednesday (Nov 15).

"President Trump often emphasises that he put all options on the table," Choo told a Washington think-tank.

"We want to make sure that this option of another war is not placed on the table. Under no circumstances should the US go ahead and use a military option without the consent of South Korea.

"We must seek a peaceful resolution of the matter in any manner that is available to us."

The remarks by Choo, who is expected to meet Trump administration officials in Washington, underscored South Korean concerns that any US strikes against North Korea's nuclear and missile programmes could provoke devastating North Korean retaliation against South Korea.

Choo, whose president and fellow Democratic Party leader Moon Jae-in has advocated dialogue with North Korea, said Seoul backed Trump's policy of maximum pressure on Pyongyang through sanctions and that there should be no dialogue just for the sake of dialogue.

However, she said blocking opportunities for dialogue could prompt North Korean "miscalculation". 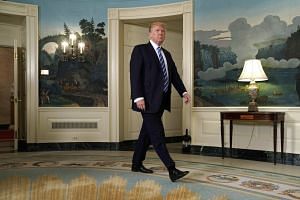 She declined to say whether she was satisfied with the Trump administration's limited efforts to engage in dialogue with Pyongyang to resolve the crisis stemming from North Korea's efforts to develop nuclear-tipped missiles capable of hitting the United States.

"I would like to reserve my answer to this question," she said.

"The current situation is extremely urgent; time is not on our side. It is not just a matter of a threat to continental US; it's a threat posed to Japan, and most importantly and what is most problematic, to the Korean peninsula," she said.

"The Korean government is trying to eliminate any mismatch that could exist between South Korea and the United States when it comes to this matter."

While Washington has said that all options, including military, are on the table in dealing with North Korea, it has stressed its preference is for a diplomatic solution.

Visiting Seoul last week, Trump warned North Korea he was prepared to use the full range of US military power to stop any attack, but also urged Pyongyang to "make a deal".

Trump, who had previously called negotiations with North Korea a waste of time, has offered no clear path to talks. Pyongyang has made clear it has little interest in negotiations, at least until it has developed a nuclear-tipped missile capable of hitting the US mainland.