WASHINGTON (NYTIMES) - Hope Hicks, a close aide to President Donald Trump who resigned nearly two years ago, will return to the White House in a new role, administration officials said on Thursday (Feb 13).

Hicks, 31, worked on Trump's 2016 campaign from its inception and followed him to the White House after he was elected, eventually becoming communications director.

Her return will come as his reelection campaign intensifies and as his advisers say the superstitious president has talked about recreating some aspects of that first race.

Hicks' title when she left belied her influence with Trump, who felt more personal comfort with her than with almost any other adviser.

But on her return, she will report to Jared Kushner, the president's son-in-law and senior adviser, and work with White House political director Brian Jack.

Her title will be "counsellor to the president."

A senior administration official said that Hicks would work on projects that Kushner oversees, including the reelection campaign.

She will not rejoin the communications office.

"There is no one more devoted to implementing President Trump's agenda than Hope Hicks," Kushner said in a statement. "We are excited to have her back on the team."

White House press secretary Stephanie Grisham described Hicks as "one of the most talented and savvy individuals I have come across."

"She has always impressed me with her quiet confidence, loyalty and expertise," Grisham said, "and I am beyond thrilled to welcome Hope back to the White House." 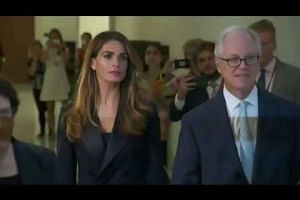 Hope Hicks, the quiet one in Trump's White House, suddenly feels the glare

Since last fall, Hicks had been working as the chief communications officer at Fox, the spinoff company started by Lachlan Murdoch, the son of media mogul Rupert Murdoch.

The White House she will return to this winter is very different from the one she left. A number of senior aides have departed, including chief of staff John Kelly and his deputies. I

In their place are Mick Mulvaney, the acting White House chief of staff, and a number of aides who are loyal to him.

And at the time Hicks left, the investigation by special counsel Robert Mueller was still under way - and a year from wrapping up. She was among the many administration officials he interviewed for his final report and she testified before congressional committees on some of the issues that it raised.

Hicks' time with Trump began when she was working as an aide for his elder daughter, Ivanka Trump, on her fashion brand. He hired her for his skeleton staff when he began his campaign for president in 2015, and because the campaign was so small, Hicks, then 26, was constantly at Trump's side.

From there, she became indispensable to Trump, and once he became president, he brought her into the West Wing.

Some newer and more senior aides tried to block Hicks' access to the president, but her relationship with him outlasted most of their tenures.