WASHINGTON (WASHINGTON POST) - In a White House full of noise, she is the quiet one. Not the TV gladiator, not press room warrior, not a general. Certainly not the Mooch.

Hope Hicks, the discreet aide always at President Donald Trump's side whose desk is just outside the Oval Office, is his right-hand woman. Improbably, the former model, at only 29, has worked with Trump longer than anyone he is not related to at the White House.

But now Hicks is suddenly frying under the spotlight of scandal, a central figure in two White House controversies - the Russian investigation and the departure of a senior White House aide accused of physically abusing two ex-wives.

Hicks has been dating Rob Porter, 40, who left his job on Wednesday, and was involved in crafting the widely condemned initial White House defence of him. Chief of Staff John Kelly called him "a man of true integrity."

After Porter began dating Hicks, an ex-girlfriend brought accusations to the White House about Porter's abuse of his ex-wives.

In recent days, Trump has complained about Hicks - a rare occurrence for a president who rages about others but rarely about her. Her colleagues have quietly accused her of looking out for Porter and not the White House, and she has been visibly upset in recent days as her personal life becomes a national news story.

West Wing aides say she has glanced at the TV screens, seen her face and quickly looked away.

Until now, it was Hicks' quiet judgment that had been her most valuable currency in Trump's world. She is attracting so much unwanted attention that paparazzi are even following her. But it is a sign of her influence with Trump, and her unusual role in the West Wing, that no one is seriously talking about removing Hicks even as the turmoil is threatening Kelly's job.

"Hope is absolutely fantastic. She was with the campaign from the beginning, and I could not ask for anything more," Trump said Saturday. "Hope is smart, very talented and respected by all."

"Trump has seen her loyalty on the campaign and during the turbulent beginning of this administration, and he relies on her," said Christopher Ruddy, a close friend of the president and chief executive of the conservative website Newsmax. 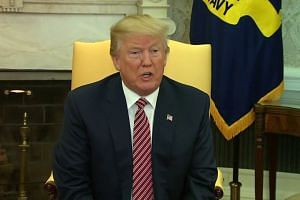 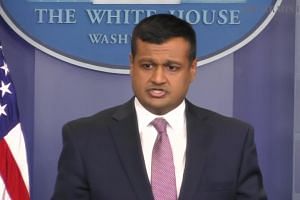 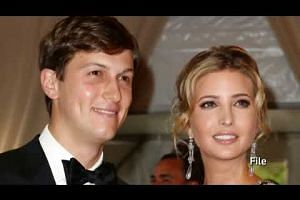 When the allegations became public earlier this week, Kelly initially said: "Rob Porter is a man of true integrity and honour, and I can't say enough good things about him."

That response, which was partially orchestrated by Hicks, caused outrage among many. The National Organisation for Women called Kelly an "enabler of domestic violence." Others in the White House said Kelly believes Hicks did not tell him all the facts about Porter - and should have recused herself from the matter because she was dating him. A White House spokesman said Kelly and Trump remain confident in her performance.

A former Rhodes scholar with a Harvard law degree, Porter has called the allegations "vile" and "simply false." Hicks has told others in the White House she is upset about the accusations but has not publicly criticised Porter, White House aides say.

As White House aides scrambled to respond, Hicks has told others it would be entirely out of character for him to hit an ex-wife.

Porter departed the White House after the Daily Mail published a photo this week of one of the women he was married to, Colbie Holderness. She said Porter punched her in the face, and she produced a photo of her eye with a yellow and purple bruise, which she said was evidence of the violence. A second former wife, Jenni Willoughby, also said Porter was physically abusive.

Hicks, whose father is a public relations executive who worked with the National Football League, has more experience in public relations and fashion than politics. As a teen, she modelled for Ralph Lauren. After graduating from Southern Methodist University, she worked for a PR firm that counted the Trump Organisation as a client. The Trumps persuaded her to work directly for the family business; among other duties, she helped publicise Ivanka Trump's fashion and accessory line.

During the election, Hicks was romantically linked to Corey Lewandowski, Trump's campaign manager. Trump fired Lewandowski, who at one point was accused of physically pushing a female news reporter.

In his campaign memoir Let Trump Be Trump, Lewandowski described the unusual breadth of Hicks' responsibilities.

"When we landed, it was Hope's job to steam him. 'Get the machine!' he'd yell," Lewandowski wrote. "And Hope would take out the steamer and start steaming Mr Trump's suit, while he was wearing it! She'd steam the jacket first and then sit in a chair in front of him and steam his pants."

Lewandowski also described her as having a photographic memory, and others praised her savvy. Ruddy said Hicks' good looks causes some to overlook her ability.

"She's really quite talented and able," he said.

Hicks wields considerable power as Trump's gatekeeper and is often the last to see him every day as she walks him back to his residence.

Last summer, Trump tapped her to succeed Anthony Scaramucci, "The Mooch," who was fired after only 10 days. By all accounts, she was communications director anyway - dealing with the most sensitive stories about Trump, the special counsel probe and his family.

Hicks has little experience in Washington and is quick to admit it.

During meetings, she has asked basic questions about the health-care law or how Congress might work on any given issue, according to two people at the White House.

"Most people in Washington aren't going to ask a question in front of their peers in a large meeting. They are going to wait, keep quiet, go look it up and go learn about it," one aide said. "I actually respect her for it because she got answers."

Trump has been known to turn to Hicks while he is talking to reporters and ask her which poll showed him with high favourable ratings. He analyses TV coverage and individual pundits with her. In a move that shows his trust in her, Trump will even occasionally preview one of his tweets with Hicks - although she does not tweet herself.

Trump often shouts for Hicks to come immediately to the Oval Office. She rarely leaves the West Wing during the day, aware he could want her to come in the office at a moment's notice.

"He'll say, 'Hope, remember when we did this? Tell the guy over here what it was like when we won New Hampshire,'" another official said. "'Hope, get in here!'"

Recently, Hicks' name has surfaced relating to special counsel Robert Mueller's investigation into whether Trump sought to obstruct a federal investigation into Russian interference in the 2016 election. She helped draft a news statement on Air Force One, partly at the direction of the president, that misrepresented the purpose of Donald Trump Jr's meeting with a Russian lawyer during the campaign, according to multiple administration officials.

Hicks has been interviewed by Mueller's investigators.

She has also raged against those who leak to the news media and has defended Trump even in situations where other aides rolled their eyes. She has frequently told others that Trump is charming and that she wishes others saw him as she does.

"To the public, she remains in the background," said Kellyanne Conway, counsellor to the president. 'To the President, she is front and centre."