NORTH CHARLESTON (South Carolina) • When Boeing broke ground on its new factory near Charleston in 2009, the plant was trumpeted as a state-of-the-art manufacturing hub, building one of the most advanced aircraft in the world.

But in the decade since, the factory, which makes the 787 Dreamliner, has been plagued by shoddy production and weak oversight that have threatened to compromise safety.

A New York Times review of hundreds of pages of internal e-mails, corporate documents and federal records, as well as interviews with more than a dozen current and former employees, reveal a culture that often valued production speed over quality. Facing long manufacturing delays, Boeing pushed its workforce to quickly turn out Dreamliners, at times ignoring issues raised by employees.

Complaints about the frenzied pace echo broader concerns about the firm in the wake of two deadly crashes involving another jet, the 737 Max. Boeing is facing questions about whether the race to get the Max done quickly, and catch up to its rival Airbus, led it to miss safety risks in the design, like an anti-stall system that is suspected to have played a role in both crashes.

Safety lapses at the North Charleston plant have drawn the scrutiny of airlines and regulators. Qatar Airways stopped accepting planes from the factory after manufacturing mishaps damaged jets and delayed deliveries. Workers have filed nearly a dozen whistleblower claims and safety complaints with federal regulators, describing issues like defective manufacturing, debris left on planes and pressure to not report violations.

Others have sued Boeing, saying they were retaliated against for flagging manufacturing mistakes.

Mr Joseph Clayton, a technician at the North Charleston plant - one of two facilities where the Dreamliner is built - said he routinely found debris dangerously close to wiring beneath cockpits. "I've told my wife that I never plan to fly on it," he said. "It's just a safety issue."

I've found tubes of sealant, nuts, stuff from the build process. They're supposed to have been inspected for this stuff, (but) it still makes it out to us.

MR RICH MESTER, a former Boeing technician who reviewed planes before delivery, on finding stray objects left inside aircraft. He was fired, and a claim was filed on his behalf over the termination of his services.

In an industry where safety is paramount, the collective concerns involving two crucial Boeing planes - the firm's workhorse, the 737 Max, and another crown jewel, the 787 Dreamliner - point to potentially systemic problems. Regulators and lawmakers are taking a deeper look at Boeing's priorities, and whether profits sometimes trumped safety.

"Boeing South Carolina teammates are producing the highest levels of quality in our history," Mr Kevin McAllister, Boeing's head of commercial airplanes, said in a statement about its aircraft.

In an industry where safety is paramount, the collective concerns involving two crucial Boeing planes - the firm's workhorse, the 737 Max, and another crown jewel, the 787 Dreamliner - point to potentially systemic problems. Regulators and lawmakers are taking a deeper look at Boeing's priorities, and whether profits sometimes trumped safety.

All factories deal with manufacturing errors, and there is no evidence the problems in South Carolina have led to any major safety incidents. The Dreamliner has never crashed, although the fleet was briefly grounded after a battery fire. Airlines, too, have confidence in the Dreamliner.

On several planes, Mr John Barnett, a former quality manager who worked at Boeing for nearly three decades and retired in 2017, discovered clusters of metal slivers hanging over the wiring that commands the flight controls. If the sharp metal pieces - produced when fasteners were fitted into nuts - penetrate the wires, he said, it could be "catastrophic".

Mr Barnett, who filed a whistleblower complaint with regulators, said he had repeatedly urged his bosses to remove the shavings. But they refused and moved him to another part of the plant, he claimed.

A spokesman for the Federal Aviation Administration (FAA), Ms Lynn Lunsford, said the agency had inspected several planes certified by Boeing as free of such debris and found those same metal slivers. In certain circumstances, it can lead to electrical shorts and cause fires.

Officials believe the shavings may have damaged an in-service airplane on one occasion in 2012, according to two people with knowledge of the matter.

Less than a month after the crash of the second 737 Max jet, Boeing called North Charleston employees to an urgent meeting. The firm had a problem: Customers were finding random objects in new planes. Foreign object debris is a common issue in aviation. Employees are supposed to clean the bowels of the aircraft as they work, so they do not accidentally contaminate the planes with shavings, tools or other items.

But debris has remained a persistent problem. In an e-mail this month, Mr Brad Zaback, head of the 787 programme, reminded the North Charleston staff that stray objects left inside planes "can potentially have serious safety consequences when left unchecked".

At the North Charleston plant, current and former workers describe a losing battle with debris.

"I've found tubes of sealant, nuts, stuff from the build process," said Mr Rich Mester, a former Boeing technician who reviewed planes before delivery. Mr Mester was fired, and a claim was filed on his behalf with the National Labour Relations Board over the termination of his services. "They're supposed to have been inspected for this stuff, (but) it still makes it out to us."

Employees have even found a ladder and a string of lights left inside the tails of planes, near the gears of the horizontal stabiliser. "It could have locked up the gears," Mr Mester said.

When it was unveiled in 2007, the 787 Dreamliner was Boeing's most important new plane in a generation. The wide-body jet, with a lightweight carbon fibre fuselage and advanced technology, was a hit with carriers craving fuel savings.

Airlines ordered hundreds of the planes, which cost upward of US$200 million (S$271 million) each. Spurred by high demand, Boeing set up a new factory. 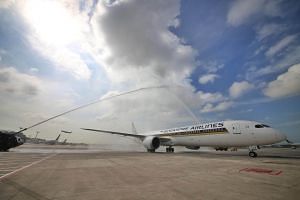 The initial excitement when the first Dreamliners entered service in late 2011 was short-lived. A little more than a year later, the entire fleet was grounded after a battery fire on a Japan Airlines plane.

Boeing was forced to compensate carriers, hurting profit. All the while, production delays mounted, and Airbus was catching up with a rival plane, the A-350.

In North Charleston, the time crunch had consequences. Hundreds of tools began disappearing, according to complaints filed in 2014 with the FAA by two former managers, Ms Jennifer Jacobsen and Mr David McClaughlin. Some were "found lying around the aircraft", Ms Jacobsen said in her complaint.

Planes were also damaged during manufacturing. A Dreamliner built for American Airlines suffered flooding in the cabin so severe that seats, ceiling panels, carpeting and electronics had to be replaced in a weeks-long process.

In the interest of meeting deadlines, managers sometimes played down or ignored problems, according to current and former workers.

Mr Barnett, the former quality manager, learnt in 2016 that a senior manager had pulled a dented hydraulic tube from a scrap bin. He said the tube, part of the central system controlling the plane's movement, was installed on a Dreamliner. Mr Barnett said the senior manager had told him: "Don't worry about it." He filed a complaint with human resources, company documents show.

He also reported to management that defective parts had gone missing, raising the prospect that they had been installed in planes. His bosses, he said, told him to finish the paperwork on the missing parts without figuring out where they had gone.

The FAA investigated and found that Boeing had lost some damaged parts. Boeing said that as a precautionary matter, it had sent notices to airlines about the issue. The company said it had also investigated the flawed hydraulic tube and had not substantiated Mr Barnett's claims.

WASHINGTON • The US Federal Aviation Administration (FAA) is conducting what it calls a comprehensive multi-nation review of the control systems of the Boeing 737 Max airliner to include experts from nine civil aviation authorities.

The review is to begin on April 29 and is expected to take 90 days, the FAA announced.

The review will "evaluate aspects of the 737 Max automated flight-control system, including its design and pilots' interaction with the system, to determine its compliance with all applicable regulations and to identify future enhancements that might be needed", the agency said on Friday.

That system is suspected to have played a role in the Oct 29, 2018 crash of a Lion Air flight near Jakarta, killing 189, and in the March 10 crash of an Ethiopian Airlines plane near Addis Ababa, killing 157. Both crashes occurred shortly after take-off.

Boeing's Max planes have been grounded worldwide since then, while engineers and investigators seek the exact causes of the crashes.

The new review will be chaired by Mr Chris Hart, a former head of the US National Transportation Safety Board, and will include experts from the FAA and Nasa. Civil aviation authorities from the European Union and these countries will take part: Australia, Brazil, Canada, China, Japan, Indonesia, Singapore and the United Arab Emirates.

In both the Indonesian and Ethiopian crashes, Boeing's new anti-stall system known as MCAS has been called into question. It reportedly lowered the planes' noses repeatedly despite pilots' efforts to wrest back control. On Tuesday, Boeing carried out an engineering test flight of a Max plane with an updated MCAS system, considered a key step to recertifying the plane for flight.