The fact-finding mission from the Organisation for the Prohibition of Chemical Weapons (OPCW) to the Syrian town of Douma was put on hold after the UN security team was fired at during a reconnaissance tour on Tuesday.

In a report sent to the Security Council and obtained by AFP, the UN department of safety and security (UNDSS) said they were hoping to make arrangements that would allow the team to deploy "at the earliest possible time".

"UNDSS in Damascus is now engaged in further discussions and coordination with representatives of the Syrian Arab Republic and the Russian military police on how to enhance and reinforce security arrangements in specific locations in Douma," said the report sent to council members.

This should allow the fact-finding mission to deploy to those locations "at the earliest possible time and based on lessons learned during the advance security visit".

The OPCW team arrived in Damascus on Saturday and are to carry out an on-site investigation in Douma of the suspected gas attack on April 7 that reportedly killed more than 40 people.

The United States, France and Britain have accused President Bashar al-Assad's forces of carrying out the attack. 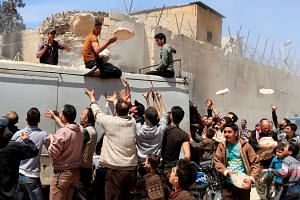 Russia and Syria deny that toxic gas was used in Douma.

On Tuesday, the UN security team was escorted by Russian military police to two sites in Douma, a town near Damascus that was retaken last week following a Russian-backed Syrian offensive.

The UN team left the site "under the cover and protection of the Russian military police and safely returned to Damascus," it added.

OPCW chief Ahmet Uzumcu earlier briefed ambassadors in The Hague on the incident and said the team required "unhindered access to the sites" to carry out its work.

Syria's UN ambassador Bashar Jaafari told the Security Council on Tuesday that the OPCW experts would begin their investigation once they received the all-clear from the UN team. 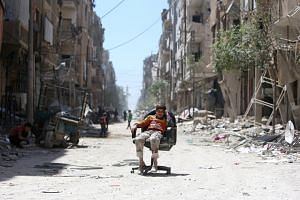