TEL AVIV - Civilisation began in the Middle East, which is home to many sites of significance to mankind. And Prime Minister Lee Hsien Loong's visit to Jordan, Israel and the Palestinian Territories this week took him to several of these sites.

Mr Lee visited St George's Church in Jordan last Sunday and viewed a floor mosaic, known as the Madaba Map and which dates back to the sixth century AD. It is believed to be the oldest surviving map of the Holy Land.

On Monday, he went to Al Maghtas, considered to be the original site of Jesus' baptism on the Jordan River, before the Singapore delegation was driven to Jerusalem.

In Jerusalem's Old City - a historic area just under 1 sq km - Mr Lee was taken to the Church of the Holy Sepulchre, which contains two of the holiest locations for Christians: the site where Jesus was believed to have been crucified as well as his tomb. 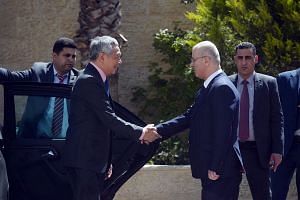 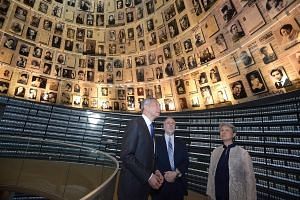 Different parts of the church are owned by different denominations, and the keys are safeguarded by two Muslim families.

He also visited the Western Wall, part of the remains of the Second Jewish Temple destroyed by the Romans in 70 AD. It is also the holiest place where Jews are allowed to pray.

On Tuesday, Mr Lee visited Yad Vashem, a museum to remember the victims of the Holocaust.

And on Wednesday, he toured the Temple Mount complex, also in the Old City, where the Dome of the Rock and Al-Aqsa Mosque, the third holiest site for Muslims, are located.

The complex is managed by an endowment overseen by the Jordanians.

He was also shown the inside of the mosque, which is not normally open to non-Muslims.

Asked about the sites he visited, Mr Lee noted that the Yad Vashem memorial - while about the experience of the six million Jews killed in World War II by the Nazis - also had a message to humankind in general of "how you must work very hard to avoid massacres, genocides and evil things happening".

At the Dome of the Rock, Mr Lee was taken to see the Foundation Stone, believed by many to be the first part of the world to be created. Muslims believe it was also where Prophet Muhammad ascended to heaven on a night journey.

Mr Lee said it was moving "to see a spot which is sacred to many faiths", and to see the faithful praying or just having a moment of contemplation and meditation.

"At the same time, it's a reminder of how complicated things are in the Middle East to solve," he added.

"These are problems which will take a very long time to resolve. But while they are resolved, all faiths can share, can have access to it, can consider it sacred and deeply meaningful - and can learn to live in peace and harmony with one another."