TEL AVIV - Making headway on the Israeli-Palestinian conflict will not be easy, but it is necessary, Prime Minister Lee Hsien Loong said, as he encouraged both sides to start taking steps, build on them and work towards a deal on a two-state solution.

"But the difficulties in making progress are not simple," he added in an interview with Singapore media at the end of a week-long trip to Jordan, Israel and the Palestinian Territories.

The need to resume negotiations on a two-state solution was a key theme in Mr Lee's discussions with Israeli Prime Minister Benjamin Netanyahu on Tuesday, and when he met Palestinian PM Rami Hamdallah on Wednesday.

Confidence about a solution has waned on both sides of late: Israeli leaders cite Palestinian incitement of violence as a stumbling block to peace, while Palestinian leaders say the continued expansion of Israeli settlements on occupied land is a major obstacle. 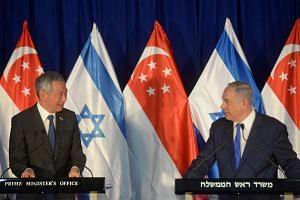 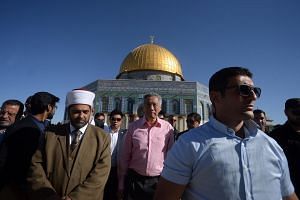 Against this backdrop, Mr Lee told reporters that the stalled peace process was a situation "where if you try to do everything at once, you will fail, because some of the problems are just too hard to solve straightaway".

"It's not just a matter of substance, of what deal can be made, but also of the trust and the mutual confidence that exists, and the goodwill that must be built up over time so that you can make a deal together," he added.

"They understand it and both sides would like to do it, but realising it is hard."

Mr Lee noted that this trip gave him "a better feel of the situation" with regard to the peace process.

His visit also enabled Singapore to renew its friendship with three important partners in the Middle East.

In Israel, he received an honorary doctorate from Hebrew University and witnessed the signing of agreements on R&D collaboration. He also met technological industry leaders, and hopes more Israeli companies will find it worthwhile to have a presence in Singapore.

With Palestine, he announced a doubling of the sum for an enhanced technical assistance package to $10 million and found that it was also interested in developing the middle level of its education system - the equivalent of polytechnics and Institutes of Technical Education.

Palestinian Economy Minister Abeer Odeh, who accompanied Mr Lee in Ramallah, visited Singapore in last month and was impressed by the ITEs.

"So we are inviting them to come, to see how we do it, and we can do a consultancy study with them and identify how perhaps we can help them to get started on this," Mr Lee said. 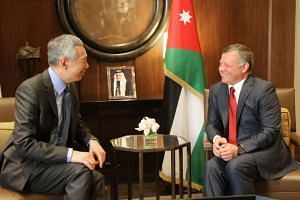 On the first leg of his trip, Mr Lee also visited Jordan, where he met King Abdullah II and PM Abdullah Ensour and discussed opportunities for Jordanian officials to build their capabilities in areas like water management and nursing.

He also exchanged notes on the security situation while in Jordan, some of whose citizens have joined the Islamic State in Iraq and Syria (ISIS).

"They worry about the impact of Daesh not just in the region but wider," Mr Lee said, using the Arabic acronym for ISIS.

"Between governments and security agencies, we quietly exchange information and deal with the problem. We have been reasonably effective in Singapore and we have benefited from information and intelligence sharing with partner agencies, counterparts and other countries," he added.