PARIS • France was supposed to be next.

Following the seismic shocks of the Brexit referendum and the victory of Mr Donald Trump in the US presidential race, commentators worldwide fixed their sights on the French presidential election as the next potential populist upheaval.

"Everyone told us it would be impossible," Mr Macron declared to a crowd that erupted in cheers. "But they did not know France."

Why did right-wing populism fall flat on its face in France, a country that would seem such a fertile breeding ground?

Everyone told us it would be impossible. But they did not know France.

MR EMMANUEL MACRON, on his victory 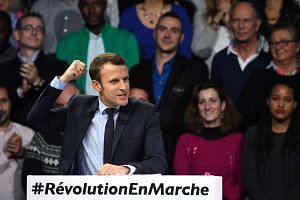 The country, after all, has had double-digit unemployment for years. It has been rocked by terrorist attacks - perpetrated mostly by Islamist militants. In the aftermath of that violence, there has been a strong anti-immigrant backlash.

But compared with Britain and the United States, analysts say, there were two key factors that helped explain why the centre held: France's history and relatively lower levels of inequality.

French voters were clearly ready to back a political outsider. But for many, Ms Le Pen's National Front (FN) did not represent change in the same way Mr Trump did in the US.

Co-founded in 1972 by Ms Le Pen's father, the convicted Holocaust denier Jean-Marie Le Pen, the party has existed on the margins of public life for decades.

"The rejection of Le Pen was a basic rejection of the extreme right and its racist, anti-Muslim sentiment," said Professor Vivien Schmidt, an expert in French and European politics at Boston University.

The Vichy government assumed power after France fell to Nazi Germany in 1940. Although it is infamous for having complied with German demands to deport tens of thousands of Jews to the death camps, the regime also passed its own slew of anti-Jewish regulations.

Although Ms Le Pen sought to change the FN's reputation for anti-Semitism and racism, her efforts were undermined by revelations in French media that several of the party's high-ranking members had committed variations of Holocaust denial. In a poll conducted before the election, 58 per cent of voters said the FN presented a "threat to democracy".

Perhaps the most visceral challenge to France's political establishment in recent years has been terrorism. More than 230 people have died here in terrorist attacks in the last two years, many committed by men from immigrant backgrounds.

Despite the rise in popularity of Ms Le Pen's anti-immigrant platform in the aftermath of these attacks, most French voters seem to have rejected her appeals to sharply reduce immigration.

French journalist Antoine Leiris lost his wife, Helene, in the attack by the Islamic State in Iraq and Syria on the Bataclan concert hall in Paris in November 2015. In an interview in which he was asked about the 2017 election, he said: "Despite these horrible attacks, the French chose intelligence and wisdom."

A version of this article appeared in the print edition of The Straits Times on May 10, 2017, with the headline 'Right-wing populism proves repugnant to French voters'. Subscribe
Topics:
More
Whatsapp Linkedin FB Messenger Telegram Reddit WeChat Pinterest Print Copy permalink