PARIS • New members are flocking to French President-elect Emmanuel Macron's party as it prepares for the elections to the National Assembly next month - starting with a change in its name.

The first potential high-profile defector, Mr Manuel Valls, who was interior and prime minister under President Francois Hollande and lost in the Socialist Party's primary, said he would like to run for Parliament under Mr Macron's party, saying that "this Socialist Party is dead".

Mr Macron's campaign members Christophe Castaner and Benjamin Griveaux said Mr Valls is welcome but would have to go through the regular application process.

"I don't think he was chosen by our selection committee," Mr Griveaux said on Europe 1 radio. "I can tell you that, right now, we are discovering a lot of new friends."

The En Marche! party will now be called Republique en Marche, or Republic on the Move, party secretary-general Richard Ferrand said on Monday. 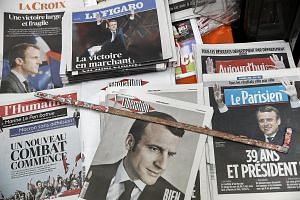 The group will announce its 577 candidates for the parliamentary seats tomorrow and will not engage in alliances, aside from the one already concluded with Mr Francois Bayrou's Democratic Movement. Mr Macron, who won the second round of France's presidential contest on Sunday with 66.1 per cent of the vote, needs to quickly transform his political movement into a vehicle capable of winning a majority or at least garnering enough seats in Parliament to govern or form a coalition.

Without that, Mr Macron would be forced to forge alliances, which could mean a watering down of his campaign promises.

The parliamentary elections are scheduled for June 11 and 18. The National Assembly in France has full powers to pass laws and approve the prime minister, and the country's two main parties - the Socialists and the Union for a Popular Movement - which for the first time were both absent from the second round of the presidential election, are seeking to use the vote to bounce back.

Mr Macron is putting together his list of candidates for the legislative elections - a task he has complicated by pledging absolute gender parity and promising that half his candidates will come from outside political circles.

His role as head of the movement has been taken over by Ms Catherine Barbaroux, who has a management background in both business and government ministries.