LONDON (BLOOMBERG) - The power to dictate the course of Brexit seems increasingly out of Prime Minister Theresa May's hands and in those of a handful of veteran politicians who want to maintain close ties to the European Union.

They are members in Parliament whose mastery of detail and knowledge of procedure have chipped away at the government's authority - one amendment at a time.

Their efforts were helped by the fact that Mrs May lost her parliamentary majority in an election and that the pro-Brexit camp, though vocal, is in a minority in the House of Commons. Mrs May's foes within her Tory party tried to unseat her in December and failed.

With the Prime Minister's deal all but certain to be defeated on Tuesday (Jan 15), and Parliament trying to take control, it is time to take a look at who is pulling the strings.

Mr Grieve is a former attorney general who has already waged successful battles to secure a greater role for Parliament in the Brexit process. He is also the reason Mrs May has to come back to Parliament with a plan B just three days after her deal is thrown out.

Mr Grieve wants a second referendum and is using all his experience as a lawyer and politician to make it happen.

Mr Letwin is a former minister known for his intellect who has already brokered deals between the government and pro-EU Conservative rebels in Parliament.

He has traditionally been a May loyalist, but this month voted against the government to try to prevent a no-deal Brexit. 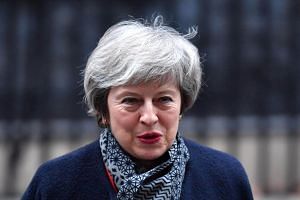 Failure to deliver Brexit would be catastrophic for democracy: Theresa May

He says he wants to find a compromise solution in the House of Commons, and has spoken in favor of a Norway-style agreement that would keep Britain inside the single market.

Mr Benn is the pro-EU chair of Parliament's Brexit Committee where he has gleaned a forensic understanding of how Brexit works and what it will mean.

He is not an ally of Labour leader Jeremy Corbyn and served in the Cabinets of former prime ministers Tony Blair and Gordon Brown.

He is fighting to prevent the chaos of a no-deal departure and maintain closer ties with the EU than Mrs May's plan allows.

He has proposed what is potentially one of the most important motions of this week's debate - a wrecking amendment that calls for Mrs May's withdrawal agreement to be thrown out and for the government to reject a no-deal exit.

Another former Labour Cabinet minister who is scrutinising the details of Brexit. Again, she is not an ally of Mr Corbyn, but an outspoken critic of the government's policy, particularly when it comes to the impact leaving the EU could have on national security.

With the "Cooper amendment" she inflicted a bruising defeat on the government on Jan 8 in a move that will deprive the Treasury of tools in the event of a no-deal split.

MR JOHN BERCOW, 55, SPEAKER OF THE HOUSE OF COMMONS

Mr Bercow is perhaps the most controversial Speaker in recent memory.

Relations with Mrs May's office have long been strained amid accusations of bias, but they hit a nadir last week, when he made an unprecedented decision to allow an amendment proposed by Mr Grieve - to Mrs May's detriment.

Those who are trying to soften Brexit see Mr Bercow as an ally: Mr Benn urged him last year to take care when crossing roads. Mr Bercow, who voted remain in the 2016 referendum, has a reputation for giving rank-and-file members of Parliament time and influence during key debates.

It is up to the Speaker to select amendments, giving him power to shape the vote on Tuesday and in subsequent debates in the run-up to exit day.

Mr Starmer, once a high-flying lawyer, is the Brexit spokesman for the opposition Labour Party. He represents one of the most Remain-voting constituencies in Britain, and is more pro-EU than the Labour leader.

He is credited with slowly shifting Mr Corbyn's Brexit policy to a softer position and wants to maintain close ties with the bloc. He was instrumental in forcing the government to publish Brexit documents it wanted to keep private, and has worked with Tory colleagues to try to prevent no-deal.