After concerns were raised by Japan's Prime Minister and the Confederation of British Industry (CBI), British work and pensions minister Amber Rudd underlined the damaging impact of leaving the European Union in March without a new trade agreement in place, and hinted she could even quit over the issue.

"This is a strong and great country, we will find a way to succeed," Ms Rudd told BBC radio on Friday. "But I do not think that no-deal will be good for this country and I am committed to making sure that we find an alternative."

Ms Rudd declined to answer when asked three times if she would resign from the government if it pursued a no-deal Brexit.

According to The Guardian newspaper, CBI director general Carolyn Fairbairn will make a speech on Friday saying that a no-deal exit risks shrinking Britain's gross domestic product by as much as 8 per cent, and urging politicians to put jobs and the economy first.

The interventions seem unlikely to be enough to help Mrs May's unpopular agreement pass Parliament when it is put to a vote in the House of Commons next Tuesday. An analysis by the BBC on Thursday suggested Mrs May's deal is on course to suffer the biggest government defeat in the history of the Commons in the vote on Jan 15.

A no-deal Brexit remains the default option if the Parliament doesn't back Mrs May's agreement next Tuesday, even though a majority of lawmakers supported a motion this Tuesday designed to reduce the chances of Britain tumbling out of the bloc on March 29. Such a scenario could trigger a recession, with the pound falling by as much as 25 per cent, official analysis suggests. 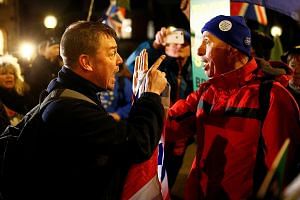 Brexit is the certain route to a divided Britain

Mrs May held meetings with Japanese Prime Minister Shinzo Abe in London on Thursday. Speaking afterward, Mr Abe publicly backed Mrs May's Brexit deal and offered his "deepest respect" for the work his British counterpart had done in securing an agreement with the EU.

"We truly hope that a no-deal Brexit will be avoided and in fact, that is the whole wish of the whole world," Mr Abe said at a press conference in Downing Street.

"There is a good deal on the table and for those who want to avoid no-deal, backing the deal is the thing to do," Mrs May said at the press conference.

But Mrs May isn't in full control of events. Parliament is flexing its muscle and Cabinet ministers are also starting to raise their head above the parapet.

Business Secretary Greg Clark said a no-deal Brexit should be ruled out. "We need to act to avoid a no-deal because I don't think there is anything remotely like a majority in Parliament that will tolerate this," he told BBC radio on Thursday.

The debate on the deal in Parliament resumes on Friday, with Home Secretary Sajid Javid and Foreign Secretary Jeremy Hunt expected to lead the argument in favour of backing Mrs May's package.