The announcement was made just hours after eurozone leaders agreed a last-minute debt rescue deal for Greece after months of agonising negotiations in which Dijsselbloem played a large role.

"I thank my colleagues for their support and cooperation and look forward to a second term as president of the Eurogroup," Dijsselbloem said in a Twitter message. 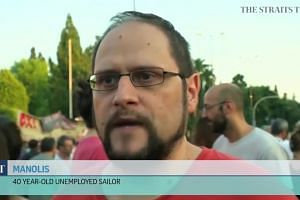 "The Eurogroup reappointed Jeroen Dijsselbloem as president of the Eurogroup for the next 2.5 years. This decision was unanimously supported by all Eurogroup members," the statement said.

Dutch Prime Minister Mark Rutte said he was "very happy" at the news.

"He's the right man (in) the right place," Rutte said in a Twitter message.

A Labour politician sitting on the right, Dijsselbloem, 49, took up the Eurogroup post at the height of the eurozone debt crisis in late 2012 when it looked entirely possible that the single currency project could fall apart.

Since then, he has been a constant presence trying to keep the euro on track despite an economic slump which badly exposed the weaknesses of many of the 19 eurozone countries.

Besides crisis management, he also helped drive through banking sector reforms, a key element in strengthening them and the eurozone as a whole to ward off further crises.

Spanish Economy Minister Luis de Guindos had been seen as a possible alternative and was originally backed by German Chancellor Angela Merkel, but in recent months Dijsselbloem appeared to have won over her hardline and influential Finance Minister Wolfgang Schaeuble.