BRUSSELS (AFP) - Eurozone leaders struck a deal Monday on a bailout to prevent debt-stricken Greece from crashing out of the euro, forcing Athens to push through draconian reforms in a matter of days.

After gruelling 17-hour talks during which the future of European integration hung in the balance, leftist Greek Prime Minister Alexis Tsipras accepted terms set by his distrustful partners.

The deal requires Greek parliament to approve a raft of market-oriented laws by Wednesday as a sign of good faith and face scrutiny by the International Monetary Fund (IMF) for compliance. 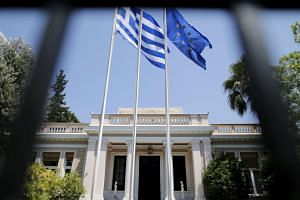 Only then will the 18 other eurozone leaders start negotiations over what Greece is to get in return: a three-year bailout worth up to 86 billion euros (S$129 billion), its third rescue programme in five years.

"All ready to go for ESM (the eurozone's bailout fund, the European Stability Mechanism) programme for Greece with serious reforms and financial support." The last-ditch deal is aimed at keeping Greece's economy afloat amid fears its cash-starved banks were about to finally run dry and trigger its exit from the single currency.

"Grexit has gone," European Commission President Jean-Claude Juncker told AFP after the talks, ruling out the threat of a departure from the euro which could have potentially destabilised the global economy.

A weary Tsipras insisted the deal was good for Greece, even though analysts say the terms are in some respects tougher than those Greek voters had rejected on his recommendation in a referendum just one week ago.

"We fought a righteous battle to the end," Tsipras said.

"The great majority of Greek people will support this effort," he added.

European and Asian markets rose, although the euro fell to $1.1009 as doubts on the deal emerged.

But Tsipras now faces a tough task selling the deal to the Greek people, parliament and his radical Syriza party, which shot to power in January on the back of promises to end five years of bitter austerity under two previous bailouts. 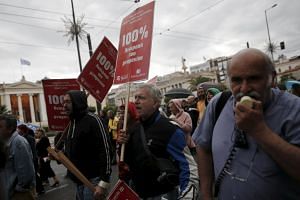 Greece's public servants are being called to stage a 24-hour strike for Wednesday, the first since Tsipras took power.

Haralambos Rouliskos, a 60-year-old economist who was out walking in Athens, described the deal as "misery, humiliation and slavery".

The eurozone creditors "are trying to blackmail us," said Katerina Katsaba, a 52-year-old working for a pharmaceutical company.

Faced with a deeply distrustful eurozone after six months of tense meetings, the 40-year-old Tsipras had to agree to demands that critics say rob Greece of financial independence.

Europe's first step will be to push the deal through several national parliaments, many in countries that are loath to afford Greece more help.

Germany's Bundestag is likely to vote on Friday, provided the Greek parliament rushes through four new reform laws by Wednesday.

Greece has to make sweeping changes to labour laws, pensions, VAT and taxes, according to the deal document.

Despite strong opposition, Tsipras also yielded to a plan to park assets for privatisation worth up to 50 billion euros in a special fund.

Some 25 billion euros of the money in that fund will then be used to recapitalise Greece's cash-starved banks.

Further humiliations came in the form of a return of officials from the widely despised "troika" of Greece's creditors - the European Commission, European Central (ECB) and IMF.

There is also a pledge to reverse laws brought in by the Syriza government that run counter to Greece's earlier bailout arrangements in 2010 and 2012.

The deal contained little mention of relieving a Greek debt mountain worth 180 percent of GDP - a step recommended by the IMF - beyond a vague mention that it should be considered later.

The deal triggered angry reactions on social media across Europe, where the Twitter hashtag #ThisIsACoup trended.

The marathon talks also exposed tensions at the heart of the post-war European integration project, especially between hawkish Berlin and dovish Paris, which has been Greece's biggest supporter during the crisis.

France also led efforts against a German-backed idea for a "temporary Grexit" option which was dropped from the leaders statement. Its appearance in an earlier draft marked the first time the idea of a euro member leaving the currency had appeared in black and white.

The eurozone must now unite to tackle the immediate problem of finding funds to keep Greece afloat, as the bailout could take months to finalise.

Eurozone finance ministers at a meeting on Monday considered bridge funding to get Greece through coming weeks when it faces several huge debt payments to the ECB and other creditors.

"We have not yet found the 'golden key' to solve this issue," said Eurogroup head Jeroen Dijsselbloem, who was renamed to a second term at the minister talks on Monday.

The ECB meanwhile has kept Greek banks afloat with emergency liquidity, but has refused to provide extra funds.

The ECB's governing council on Monday held its emergency liquidity assistance for Greece unchanged at around 89 billion euros ($99 billion).

Banks are closed in Greece and many cash machines are running dry despite a 60-euro-a-day ATM limit.