EDMONTON (NYTIMES) - The fume hoods in the lab set up by Saba Saadat were silent Friday (Jan 10), the lab's computers and microscopes switched off. Sobs occasionally punctuated the silence.

Professor Meghan Riddell, the leader of the cell biology lab, comforted a weeping student while two teary-eyed technicians stood by. Saadat, a biology student, had been one of the most promising students at the University of Alberta.

"She was a Ph.D. disguised as an undergraduate," said Riddell, herself in tears. "That girl could think."

Saadat was among the 176 people who died when a flight leaving the Iranian capital, Teheran, bound for Ukraine crashed Wednesday. Also killed were her sister, a recent graduate in psychology who was heading to graduate school, and their mother, an obstetrician and gynaecologist.

In all, 57 Canadians died and a number of other victims appear to have been Iranian students studying in Canada.

Although the crash has spread grief throughout the Iranian diaspora in Canada, the tragedy has disproportionately struck the city of Edmonton, capital of the oil-rich province of Alberta. About 27 residents of Edmonton were on board the airliner, and at least 10 of them were, like Saadat, students or faculty at the University of Alberta.

The anguish has only been deepened by evidence that it was an Iranian missile that brought down Ukraine International Airlines Flight 752.

Reminders of the losses were everywhere as the university's sports centre was readied for a public memorial service Sunday.

Flowers, chocolates, photographs and candles were set outside the offices of the faculty members who perished, in departments where students studied and on the steps of Alberta's sandstone legislature.

Flags have been lowered throughout the city of just under 1 million people. A railway bridge spanning a deep river valley that defines Edmonton geographically has been lit with red and white lights - the colours of the Canadian flag - in memorial.

In this multicultural nation, Iranians are comparative newcomers: Most arrived after the 1979 Islamic Revolution. Today, by some counts, Canada has the third-largest number of expatriate Iranians in the world, and its universities are a top destination for Iranian graduate students. 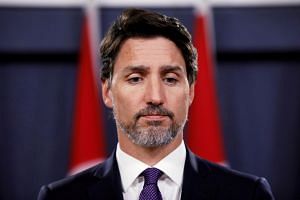 Iranian Canadians are an accomplished group academically and professionally. In Edmonton, as across Canada, they include physicians, dentists, engineers and academics.

"It's a gift to Canada, and you know what, it's the regime's loss in Iran," said Payman Parseyan, the past president of the Iranian Heritage Society of Edmonton, speaking of the contributions the immigrants have made to Canada. "They've suppressed the people, the people are upset with the government and so they leave. The best minds learn to get out." Parseyan, a 30-year-old former municipal police officer who now inspects oil and gas line construction, refers to himself as Persian rather than Iranian to distance himself from the government in power in his homeland.

His parents, both geologists, brought Parseyan to Canada when he was 8, along with his two siblings. After briefly staying with distant relatives in Toronto, they took a four-day train trip to Edmonton, a city about which they knew nothing.

He acknowledged that for most Iranians looking to leave, Canada is a second choice after the United States as the preferred destination. The frigid weather, particularly in Edmonton, can be a deterrent.

Perhaps in reaction to the theocracy that rules Iran, Parseyan said that most Iranians in Edmonton are secular. The heritage society, a volunteer group, generally brings them together around Iranian holidays as well as for Edmonton's annual ethnic festival, a major event in a city of many nationalities.

In a suburban shopping centre featuring food from Japan, Taiwan, India, Pakistan and Korea, Mahnuash Jannesar, the co-owner of the Persia Palace, a combined grocery and restaurant, said that as photos of the victims began appearing in the news media, she recognised about half of them as customers.

While she hadn't been aware of the names of many of them before their deaths, she did know Pedram Mousavi and Mojgan Daneshmand, two regular customers who were professors of engineering and who died in the crash with their two children.

It was the loss of the students who came to her shop that most grieved Jannesar, she said.

"They came to Canada for a future; there is no future in Iran," she said. "It's so sad."