SINGAPORE - The fledgling local e-sports community has received a boost, with Singtel announcing on Wednesday (March 13) its sponsorship of Singapore's first e-sports SEA Games team and the appointment of three brand ambassadors for its e-sports arm PVP.

Under the sponsorship, the SEA Games-bound gamers - who have yet to be selected - will receive financial support for overseas training stints as well as study stipends.

The Straits Times understands that the sponsorship amount could run into at least five figures as it could involve up to 30 people, including players and coaches.

E-sports will feature for the first time at the SEA Games to be hosted by the Philippines in November, with five games confirmed so far. The first round of local qualifiers will be held in April.

Singtel did not disclose how much the sponsorships are worth.

Gaming is an area of increased focus for Singapore, said Senior Minister of State for Education Chee Hong Tat, who was the guest of honour at the Singtel launch ceremony.

"E-sports is not just for fun, it's actually serious business. We can grow a whole industry cluster around e-sports and different segments of the economy and workforce can get involved," said Mr Chee. 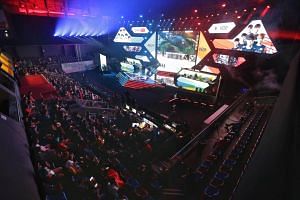 E-sports: Selection process for 2019 SEA Games announced, representatives to be decided by May

Taking Singapore e-sports to the next level

"It's important to equip our workers with the (relevant) skills, and for our institutes of higher learning and companies to come together to work out training programmes for both students and people in the workforce."

He added that e-sports can also help drive tourism through bringing large-scale events to Singapore.

Singtel decided to deepen its involvement in e-sports after the success of its first gaming tournament last October, which offered $300,000 in prize money and attracted 13 million online viewers for the finals.

The telco is launching community leagues for tertiary institutions here and corporates in addition to plans for expanding its PVP Esports Championship to the regional level later this year.

It is also exploring the development of more services and content targeted at mobile gamers, including a potential cloud gaming tie-up with telecom giant Huawei.

It has plans to integrate the various e-wallets from its regional mobile subsidiaries as well, with an eye on facilitating in-app purchases for mobile games.

"We have 675 million customers and 200 million are mobile gamers. Gaming and video content is driving data usage growth across the region so (going into e-sports) is something that makes sense as a business," said Mr Arthur Lang, chief executive officer of Singtel's International Group.

"At the same time we all saw the potential of sport to galvanise Singaporeans when Joseph Schooling won his Olympic gold medal (in 2016). We believe the same can happen with e-sports here and we are excited to work with our local talent."

Getting an established mainstream brand like Singtel as a sponsor sends "a big message to the market about the results we are achieving and our vision of creating sustainable careers for players", said Resurgence founder and chief executive Jayf Soh.

He added: "It helps us better support our players so they don't have to worry about supporting themselves and can focus fully on training. We also hope to attract top overseas coaches from developed markets like China and tap into Singtel's regional presence for future expansion plans."