RIO DE JANEIRO - Bahamian Shaunae Miller has been unbeaten in the 400m this year, and she was not about to lose when it mattered most.

She stopped the clock at 49.44 seconds on Monday (Aug 15), diving across the finish line to prevent American Allyson Felix from becoming the first woman to win five gold medals in athletics.

"I've never done it before," Miller said of her head-first dive. "I have some cuts and bruises, a few burns. It hurts. When I was on the ground I didn't know I'd won. I still don't know how it happened."

But she knew that she was shouldering the hopes of a nation at the Olympic Stadium - days after carrying her country's flag at the opening ceremony. And the 22-year-old did not disappoint, winning Bahamas' first medal at the Rio Games.

"This is the moment I have been waiting for, I just gave it my all," she said. "I am just so happy, so grateful, such emotions I just can't say. I've been going through so much this year. Everyone at home will all be celebrating right now." 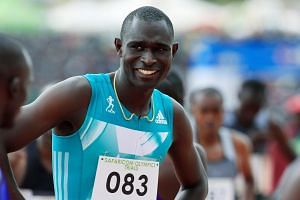 Miller, the runner-up to Felix at last year's world championships in Beijing, has enjoyed a spotless season. This was her sixth victory over the one-lap distance this year, with wins at the Diamond League races in Shanghai, Eugene and London.

Felix, whose Olympic preparations were hampered by an ankle injury, said: "It's been a tough year. I didn't quite do enough."

Earlier on Monday, Brazilian Joao Vitor de Oliveira also threw himself across the line to good effect. He finished fourth in the 110m hurdles heat in 13.63sec, qualifying for the semi-finals.

"If I am in a fight I will always put myself first," said the 24-year-old. "I did it in China at the world championships and I broke my ribs. People tell me not to but I will do it. It comes from the heart. I am in my home Olympics."