The 22-year-old cleared a Games-record 6.03m to win gold, denying Lavillenie the chance to join American Bob Richards (1952-1956) as the event's only other two-time champion.

"The gold? Incredible," said da Silva. "My first time over 6m. My hometown wanted me to win.

"The crowd were cheering me too much. I had to fix my mind on my technique, forget the people."

Lavillenie took silver (5.98m) despite rewriting his own Olympic record of 5.97m - set en route to winning gold at the 2012 London Games.

After da Silva cleared 6.03m, the Frenchman raised the bar to 6.08m but failed to soar over with his final attempt. 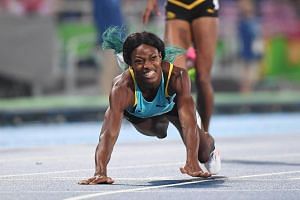 Olympics: Shaunae shows that it's Miller time with 400m gold after diving finish

Lavillenie, jeered every time he vaulted, said: "For the Olympics it is not a good image. I did nothing to the Brazilians. In 1936, the crowd was against Jesse Owens. We've not see this since. We have to deal with it."

American Sam Kendricks claimed bronze at the Olympic stadium with a jump of 5.85m.

When Lavillenie, 29, won the title four years ago, da Silva was celebrating a gold medal from the world junior championships with a jump of 5.55m.

The Brazilian has since improved by leaps and bounds, delivering the hosts their second gold medal of the 2016 Games.

"I feel a little unlucky. The bar fell from nothing at 6.03. I'll be back to win the gold back," vowed Lavillenie.