On the track, Ferrari ace Vettel roars into pole position and declares 'I love this track!'

While the track belonged to Ferrari's Sebastian Vettel last night, the stage was ruled by pop diva Ariana Grande.

Her first outing in Singapore was an impressive showing of both her flawless vocal chops and her ability to dance in potentially ankle-breaking sky-high heels.

The 24-year-old played to a crowd of over 50,000 at the Padang Stage last night for the 2017 Formula One Singapore Airlines Singapore Grand Prix.

The short, one-hour set showcased the best of Grande and her four-octave soprano.

She never broke a sweat, despite the sultry weather and even managed to hold a tune while cycling on an exercise bicycle on the Nicki Minaj collaboration, Side To Side.

Her catalogue of pop R&B tunes like One Last Time and Bang Bang worked for the diverse crowd, especially the "cat ear"-wearing tweens. Backed by a full band, a small string section and a troupe of male dancers, there was plenty of spectacle to enthral her fans. 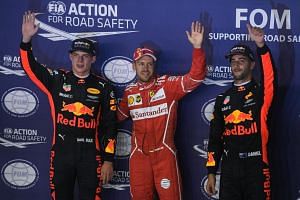 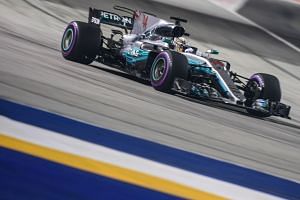 Formula One: Hamilton holding on 'for dear life' in Singapore

But it was not just the hardcore Arianators who were blown away by her impressive runs and breathy declarations of "Singapore, let me hear you". Bookending her set with Be Alright and Dangerous Woman, she reeled in the audience with sexy over-the shoulder glances and hair flips aplenty.

Also on top of his game was Vettel, who will, after grabbing pole last night, launch his Ferrari from the top of the grid in tonight's race, with the weight of history giving a turbo boost to his world title dreams.

By design of the tight and meandering track, or simply by sheer coincidence, seven of the previous nine pole sitters have gone on to win at the Marina Bay Street Circuit.

Also, the last two races in Singapore have seen drivers that lined up first, second and third on the grid finish in exactly the same order (Vettel/Daniel Ricciardo/Kimi Raikkonen in 2015 and Nico Rosberg/Ricciardo/Lewis Hamilton last year).

A four-time world champion but with the last of those consecutive crowns coming in 2013, the familiar one-fingered celebration had been a rare sight since Vettel's move to Ferrari in 2015. But there he was, wagging that right index finger after pole was secured in a new lap record of 1 min 39.491sec.

Victory for the German today would mean he has won half of the race's 10 editions.

It is no wonder Vettel bordered on delirium on the team radio, letting out a barrage of whoops and screams after securing pole. He said: "I love this track. The car was tricky but it was getting better and better as the night progressed."

A win in Singapore tonight will go some way to help the German (235 points) slingshot past Lewis Hamilton (238 points) in the drivers' championship with six races left.

Hamilton, who was racing in a faster Mercedes that had less downforce to stick to the 23 turns of the circuit, qualified in fifth (1:40.126).

Ferrari's Raikkonen, another former world champion, is under no illusion how tough the Marina Bay Street Circuit is. The Finn said: "It's always going to be difficult, especially in places like this. It's a tricky circuit, lots of corners, lots of places that are easy to make mistakes but it is our job to take it to the limit.

"Sometimes you get away with it, sometimes you don't. A lot of things can happen in this race, with safety cars and stuff. We need some luck sometimes."