(REUTERS) - Manchester United manager Jose Mourinho is struggling to win over his critics at Old Trafford but in new Fulham boss Claudio Ranieri he at least has one big fan.

Italian Ranieri takes his side, currently bottom of the Premier League, to United on Saturday (Dec 8) and said he is looking forward to renewing his friendship with the man who replaced him as Chelsea manager in 2004.

Ranieri, back in the English top flight after parting ways with Leicester City in 2017 having taken them to a fairytale title, said Mourinho was the first manager to welcome him back.

"He was the first who sent me a message to say welcome back. He is a very friendly friend. He told me, 'welcome back, all the best'. We speak about everything," Ranieri told reporters.

"It was a text message. Sometimes we speak. He's a fantastic man. I know him for a long time, when he came to Chelsea and in Italy, and he was very polite with me. He's a great man, coach, manager and also the football is important."

Mourinho wore Ranieri's initials following his sacking by Leicester last year, a mark of respect to the man who nine months earlier had taken them to the title.

The Portuguese is having a difficult time at Old Trafford with the Red Devils in eighth place - 18 points behind Premier League leaders Manchester City and eight off the top four. 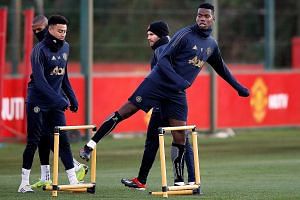 Ranieri believes they are improving although he will be hoping to add to Mourinho's woes at the weekend.

"We want to make a point there. We know it's hard but nothing is impossible."

Basement side Fulham have nine points from 15 matches and Ranieri said a string of good results starting with the game at Old Trafford could turn their season around.

"We are a work in progress. Last night, one point is much better than nothing," Ranieri said of Wednesday's draw with Leicester. "It's not easy, because when you stay at the bottom of the table, it's hard for confidence to be 100 per cent.

"But if you get a couple of results, the confidence improves immediately, and I believe we can do this soon."

Ranieri enjoyed a winning start as Fulham beat Southampton 3-2 last month. But they crashed to a 2-0 defeat at Chelsea before the 1-1 draw at home to Leicester.

Mourinho's United have drawn three consecutive Premier League games, twice coming from a goal down in Wednesday's 2-2 draw at home to in-form Arsenal.