MANCHESTER, ENGLAND (REUTERS) - Manchester United manager Ole Gunnar Solskjaer has promised there will be no complacency from him or the players now he has been confirmed as the Premier League club's permanent manager.

Solskjaer was handed the job on Thursday (March 28) after a successful three months as caretaker boss, but he said there would no easing off now he has a three-year contract - setting the Premier League title as his goal.

"Players who get complacent, they never last at this club anyway," Solskjaer told a news conference.

"I am the same, I can't be complacent and now rest on (the fact that) I have the job, It's not me. We are looking forward, we have got to work harder," he added.

In keeping with that approach, Solskjaer side-stepped a question about his pride at his appointment.

"Now the hard work starts, the enjoyable work but hard work, it is not a moment to be proud in that respect," he said. 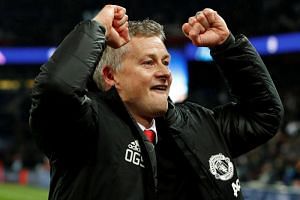 Football: Five games that tipped the scales in Ole Gunnar Solskjaer's favour for the United job

The 46-year-old Norwegian has guided United to 14 wins in 19 matches in all competitions as caretaker boss since replacing the sacked Jose Mourinho in December.

His short-term target is to secure a top-four finish and qualification for the Champions League but Solskjaer said that winning the Premier League was his goal.

"To lift the Premier League trophy again is what we expect, what we're used to, what we have done so many times," he said.

"We can't wait too many years but it's not going to happen overnight."

In the longer term, he said he wanted to continue the positive mood around the club.

"The day I walk out of the doors, I hope it is with a smile on my face and have given the supporters, the staff, the players, the club, a good time and that is all I can do, all I can promise, all I've promised to the owners, to (CEO) Ed (Woodward), everyone," he said.

"I will always be myself, I am not going to change, I will be an optimist and positive guy and we will do this together."

The Norwegian's back-room staff is expected to stay as it is with his assistant Mike Phelan, brought back to the club with Solskjaer in December, now in contract talks.

"Mick is a key part of the set-up and they are talking to each other," said Solskjaer.

"The set-up we have now I really hope is going to continue."

United host Watford at Old Trafford in the Premier League on Saturday.