From the combative Roy Keane to the glamorous David Beckham and the trickery of George Best, Manchester United's heroes have all come with standout traits.

But breaking the mould is Ole Gunnar Solskjaer, the modest Norwegian who is doing wonders at Old Trafford in an unflashy manner, without donning a cape nor being a force of personality, according to former teammate Dwight Yorke.

"Ole's one of the nicest guys you'll ever meet in football. He doesn't give you any drama, he just gets on with his job, he's totally professional in what he does," the 47-year-old ex-Trinidad and Tobago international striker said yesterday in reply to The Straits Times' question on whether Solskjaer's managerial brilliance was evident during his playing days.

"I just didn't see him at this level.

"Like everything else, you need a little luck and fortune and he got that. You got to grasp these opportunities. It's a once-in-a-lifetime opportunity for him."

Yorke was speaking on the sidelines at the launch of this year's International Champions Cup (ICC) Singapore at the Incubator, near the Padang.

On July 20, the Red Devils will take on Inter Milan and a day later, Juventus will meet Tottenham Hotspur.

British media has reported that Solskjaer is set for a permanent deal at Old Trafford this week and Yorke certainly believes the former striker is the right man to take United forward. 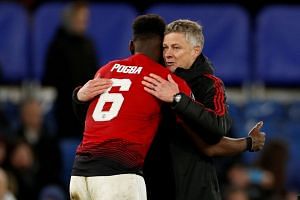 He said: "He has done a remarkable job, there is no question about that. The doubters who think that he wasn't capable of doing a job can pretty much eat their words now.

"May he continue to take the team forward. He's looking good, he's got the players playing with the passion and desire that we expect of a Man United player. That will be the case going forward."

Since Solskjaer took over on Dec 19 after Jose Mourinho's sacking, not only had he restored the team's competitive edge and playing style, he had also done so while smashing records.

He had won 14 out of 19 games, became the first United manager to win his first eight matches, surpassing Matt Busby's five, won a club record of nine consecutive away games and, by dumping Paris Saint-Germain out of the Champions League last 16, they became the first team in the tournament's history to advance after losing the first leg at home by two goals or more.

The key to the Red Devils' surge in form has been the caretaker's perceptive man-management skills, said Yorke.

He added: "I always think we have exceptional young players but these young players were not given the licence to express themselves, and expression is a word you associate a lot with Man United.

"When you just look at the talent that we have, nothing has changed.

"Our attackers (Romelu Lukaku, Marcus Rashford and Anthony Martial) are as good as any other in the Premier League.

"It's about expressing themselves and exposing their talent. They have managed to do that under Ole."

Come July 20, Singapore fans will get the chance to watch the Red Devils express themselves, and fittingly, hear the classic chant "ole, ole" reverberate in the National Stadium.