ST PETERSBURG - It was almost impossible to talk to the fanatical Argentinian fans inside the spaceship-looking St Petersburg Stadium during their World Cup Group D game against Nigeria on Tuesday.

Tens of thousands of Argentinians from Banfield to Buenos Aires, San Juan to Santa Fe were in full cry for almost the entire 90 minutes, with their eyes permanently fixed on the action on the pitch.

The crescendo was certainly deafening, spine-tingling and could easily have busted a fragile eardrum.

Amid the sea of white and sky blue jerseys, banners and flags, fans wearing chains and crosses around their necks were clutching rosary beads, singing and invoking the powers of Diego Maradona, praying for Lionel Messi to grant them a safe passage into the round of 16.

Football is truly their religion.

How the ground shook in the 14th minute when Messi scored the opener. As described by The Guardian, "it had been a holy trinity... the first touch to cushion the ball; the second to roll it into position; and the third to sweep it past Francis Uzoho, Nigeria's goalkeeper, and send a nation into rapture".

There was a temporary interruption to the celebrations after Victor Moses equalised with a 51st-minute penalty. But after recovering from the shock, the fans were back on song. There was no need for Mexican waves or the ubiquitous Seven Nation Army anthem to get them going as they kept on serenading La Albiceleste with original songs about their love for the team, as well as their belief that the team would eventually come good. 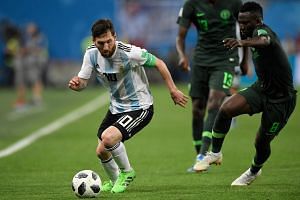 Grown men whipped off their tops to do the heliwhirl, sobbing uncontrollably as if they had just witnessed the birth of their child.

Decibel levels went up by another few notches with their full-blooded rendition of Vamos Argentina.

"You know I love you and I will give everything for the Cup... We have Maradona and Messi, we have come to Russia and we must go back as champions", was a rough translation of the song.

Argentinian Francisco Javier Ali told The Straits Times: "Even when things are looking bad, we never think we are going to lose. Argentina people love football and we always believe we are going to win.

"We channel all our hopes and dreams onto our national team because the happiness we get from seeing them win and succeed is incomparable."

Late into the night, Vamos Argentina was still stuck in my head. Yesterday, fans were still whistling and humming the melody at the airport. Tchaikovsky, the Russian composer from the romantic period who was schooled in the Saint Petersburg Conservatory, would have approved.

Move over 1812 Overture, the Argentina aria has taken over at this World Cup.