The 18-year-old beat India's Mehuli Ghosh via a dramatic shoot-off in the final after both competitors finished tied with a score of 247.2 points.

Ghosh hit 9.9 with her shot and Veloso responded with a 10.3 to clinch the gold and pumped her fist in delight.

Veloso, who finished fifth in this event at the 2014 edition in Glasgow and won last year's SEA Games title in this event, said: "I'm still shaking and can't believe it.

"I just kept telling myself to keep fighting and trust my training.

"This means everything to me and I'm so happy I could do this for Singapore."

Meanwhile, the wait for his eighth Commonwealth Games medal continues for national shooter Gai Bin after he finished a disappointing seventh in the men's 10m air pistol on Monday (April 9).

The Singaporean, who turns 50 in June and was the oldest competitor in the eight-man final at the Belmont Shooting Centre, had qualified as the fifth-best shooter for the elimination final.

But he struggled to find his rhythm, managing to score 10.0 and above only four times from his 14 shots before he was knocked out.

He finished with 133.9 points, ahead of reigning SEA Games champion Johnathan Wong of Malaysia, who was the first shooter to be eliminated. 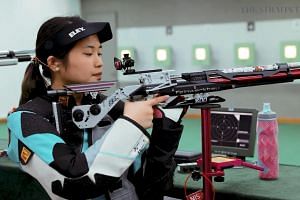 Gai said: "My performance wasn't good today. I was a bit nervous and I lacked focus in the final.

"The 8.0 I shot (in the two-shot elimination segment) made it almost impossible to catch up. With that kind of score, the gap is too much to catch up.

"My trigger technique was also poor. I probably rushed that shot and that was a mistake."

He returned empty-handed from the 2014 edition in Glasgow.

He will next compete in the 50m pistol on Wednesday.

"Everyone gets nervous in a final, it doesn't matter how old or experienced you are," Gai added. "I will try and do better in the next event."