Some 25 flights from carriers such as Singapore Airlines, Garuda and AirAsia were affected, and the Civil Aviation Authority of Singapore (CAAS) is investigating.

More than one drone was also sighted, with the drones reportedly not of recreational make, The Straits Times understands.

Singapore is not the first country to have its airport operations disrupted by drones. Similar incidents have happened in the United States, Britain and China.

In December last year, a drone attack caused a shutdown at London's Gatwick Airport, with about 1,000 flights cancelled or delayed and about 140,000 passengers affected.

Just how dangerous are drones to aircraft? And what should you take note of when flying your drone in Singapore? We take a look at seven factors.

1. Why is it risky to fly drones near airports?

Drones coming into airport airspace could impede aircraft on their final approach or take-off.

A study by the Alliance for System Safety of UAS through Research Excellence found that small unmanned aerial vehicles (UAVs) can cause more damage to planes than birds at the same impact speed, even if their weight is similar.

The think-tank used computer simulations to examine the impact of bird and UAV collisions in more than 180 scenarios, reported The Economist.

The researchers found that the drones' rigid and dense materials - such as metal, plastic and lithium batteries - can put planes at much greater risk than a bird carcass.

2. Can you stop drones from flying into restricted airspace?

Experts have said that incursions into restricted airspace are likely to continue unless more defined perimeters are drawn up.

Mr Mark Yong, chief executive of drone operations platform and solutions firm Garuda Robotics, said: "With drones becoming more accessible and demand for them increasing, the continued safe operation of drones in our tight and dense airspace will rely on regulations, technology and education."

The introduction of a nationwide "unmanned aircraft system traffic management" platform could allow for drones to be monitored in real-time, he said.

Researchers at the Nanyang Technological University are looking into the possibility of such a traffic management system for drones in Singapore. 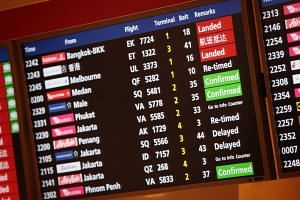 Game of drones: Airports rally firms to battle threat from above

The Republic of Singapore Air Force has several weapons that can be used against errant drones, such as a jammer gun, which emits signals that can interfere with the control signals of drones.

However, the use of jamming could affect airport operations such as radar and air traffic control.

Other solutions such as missiles or nets also run the risk of causing collateral damage.

3. What are other countries doing to tackle the problem?

Some government agencies in Europe, United States and Asia are equipped with the SkyWall100 system, which is a large bazooka that can fire a net and parachute at a target, using a scope for accuracy.

Others, such as South Korea and Japan, make use of "interceptor drones" that can lock onto a target, release a net and disable it in mid-air.

This was deployed at last year's Winter Olympics in South Korea.

The US and China have experimented with using anti-drone lasers to shoot down a drone within seconds of locating it, according to BBC.

Engineering company Boeing has developed a high-energy beam that locates and disables small drones from a distance, and even in low visibility, the report said.

China has also come up with a laser gun called "Silent Hunter" that it claims is effective in helping police intercept drones and other small aerial targets with "high accuracy".

The eagles are trained to latch onto the propellers with their talons to disable them - a method that is believed to be the first in the world.

The police, however, said in December 2017 that they will stop using the birds because training them is more expensive and complicated than they anticipated.

4. What are Singapore's rules and regulations?

Recreational drone-flying without a permit is allowed in Singapore, as long as drone pilots keep to certain regulations.

The CAAS, which manages regulations for unmanned aerial flights here, has an accessible and comprehensive list of dos and don'ts on its website.

Drone flyers have to keep in mind these regulations before they fly their drones:

- The total weight of their drone, including a payload (such as a camera), must be 7kg or below.

- Drones are not allowed to discharge any material, such as water or other substances.

- Drones cannot fly within 5km of an aerodrome or airbase, or within restricted, dangerous, protected or prohibited areas.

Permits are required for the commercial use of drones, such as paid photography, or if the requirements exceed those mentioned above.

5. Where in Singapore can you fly a drone?

It is best to fly in large, open spaces without trees, such as fields in places like Marina South or Old Holland Road.

However, under guidelines from the National Parks Board, drones are not allowed to be flown in the parks and nature reserves that the agency oversees, such as the Botanic Gardens and East Coast Park.

Most of eastern Singapore is ruled out due to the proximity to Changi Airport and Paya Lebar Air Base.

The Marina Barrage is a popular option for drone flyers, which offers good photography options, such as of the city skyline.

Bukit Timah is another area great for scenic, nature shots that is within acceptable flying zones.

For the most updated database on where you can go to fly drones, flyers can check the OneMap website.

Go to the "nearby" tab and click on Safety and Security. There, you can check areas within 5km of an aerodrome, or dangerous, prohibited and restricted places. The areas not within the circles are good to go for drone-flying.

6. What else should drone users take note of?

Drone pilots should also follow general safe flying habits. They should fly in good visibility and weather conditions, and keep the drone within sight at all times.

Users are also advised not to fly their drones over crowds or areas where they may interfere with emergency or moving vehicles.

7. What punishments do offenders face?

The flying of drones within 5km of airports or military airbases, or at altitudes above 200 feet (61m), without a permit is an offence.