LE BOURGET, FRANCE (AFP) - A quadcopter drone appears on the radar screen and makes a beeline for the control tower at Paris' Le Bourget airport.

Is this the latest in a string of drone sightings at airports that has forced costly shutdowns and affected tens of thousands of passengers?

No - it's a simulation, and the drone is quickly stopped by a defence system being trialled at the Paris Air Show.

"The jamming zone will make it turn back where it came from," says Egidio Cau, head of anti-drone systems at CS Communication Systemes as he runs the test at the company's stand for the show at Le Bourget.

Drones are more and more frequently causing havoc at airports around the world, with just the latest coming on Wednesday (June 19) when drone sightings forced Singapore's main airport to temporarily close, with dozens of flights delayed.

It joined a lengthening list of airports suffering serious disruption due to uninvited visits by unmanned aerial devices.

London's Gatwick was paralysed for 36 hours in December following repeated drone sightings. Heathrow and Newark were hit in January. Dubai and Dublin in February. Frankfurt in May.

To fight back against the scourge from the skies, companies are proposing anti-drone technologies such as jamming, interceptor nets and killer drones. 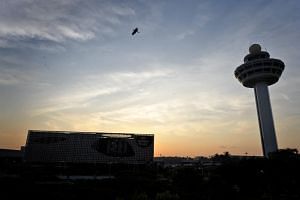 The French company has also notably been deployed by Paris police to protect the presidential platform during France's Bastille Day parade.

The primary danger posed by drones at airports is the potential they could get sucked into a plane's engine.

A part of drone batteries is explosive, which could lead to disastrous consequences even if the intrusion was accidential.

"That's where the principle of precaution to ground traffic comes from," said Thomas Gueudet, a sales executive at CerbAir, a firm which specialises in anti-drone systems.

Last week as part of the programme, a special radar was installed on top of a tower at Charles de Gaulle airport in Paris, according to ADP's deputy CEO Edward Arkwright.

"The goal is to have the system operational by the end of 2019," he said this week.

After controllers have helped work out the kinks there are plans to offer the system to other airports.

Those kinks could be numerous, from properly identifying objects (is it a drone or a bird?) to selecting the appropriate response.

For Olivier Gualdoni, CEO of the drone manufacturer Drone Volt, in the future autonomous drones will use artificial intelligence, making it more difficult to stop them using jamming technology.

Moreover, jamming of signals at an airport is not a straightforward decision.

"You jam everything: at an airport that potentially means the communications between the tower and the planes, to telephones to remote controls," said Gualdoni.

And authorisation to jam varies by country.

"Nobody can jam in Britain except in cases of potential danger to people, while in Germany police are generally allowed to do so, for example," said Markus Wolf, director of development at Hensoldt, a German firm which specialises in sensor technologies for surveillance and protection.

For Cau at CS Communication Systemes "systems that launch nets or interceptor drones may be more efficient solutions" to stop intrusions.

Despite the complexities, for firms looking to develop anti-drone systems, airports "are without a doubt the biggest market", said Hensoldt's Wolf.

"But it is also the least structured because there is still not a model on who should invest and operate such a system: air traffic control, the airport's operator, the owner, the police," he said.

France's civil aviation regulator DGAC said an EU law on drones that will enter into force in July 2020 should harmonise regulations in the bloc.

It includes notably "the obligation to put a transponder in drones, which will be a big step forward in terms of managing traffic", said CerbAir's Gueudet.

But Cau at CS Communication Systemes noted that it will not be hard for criminals to disable the transponder.