The GrabShuttle Plus trials will start at Sungei Gedong on Friday (Aug 17). Shuttle buses will run every Friday and Sunday evening to help soldiers book in and out of camp, said Grab.

The service will ferry soldiers between the camp and three areas - Punggol, Sengkang and Pasir Ris/Tampines. Fares start from $4.50 per passenger.

A Grab spokesman told The Straits Times: "We recognise that soldiers from Sungei Gedong Camp would typically need to make at least two transfers when travelling to or from the camp via public transport, and travel time for a one-way trip could often take more than two hours."

The GrabShuttle Plus service could shorten overall travel time by around 40 per cent. Soldiers can either make an immediate booking for the shuttle service or make an advance booking up to three days in advance.

The GrabShuttle Plus service operates on a non-fixed route, with buses allocated to users based on factors such as proximity of buses to the user's pick-up and drop-off point.

This is in contrast to GrabShuttle, which operates based on fixed routes and timings. 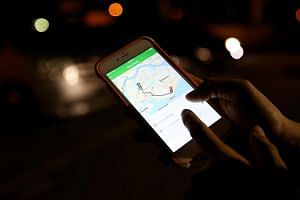 According to a flier circulated online, the GrabShuttle Plus service will pick up passengers between 5.10pm and 5.15pm on Fridays, outside the guardhouse of Sungei Gedong Camp.

The travel time to each of the three destinations is expected to be more than an hour.

The ride to Punggol and Sengkang will cost $4.50, the journey to Pasir Ris or Tampines will cost $5.

On Sundays, the bus will pick up soldiers booking into camp between 8pm and 8.35pm, at the three neighbourhoods. The same fares apply.

More camps could soon get a similar shuttle service.

The Grab spokesman said: "Through both the Sungei Gedong Camp and KC3 (Kranji Camp III) trials, we hope to better understand how we can improve transport efficiency and accessibility, especially in the under-served areas.

"We also hope to expand the trials to other military camps in Singapore, so as to help more people shave time off the road, while making commuting in groups more efficient."

The shuttle service serving an army camp was first piloted at Kranji in July.

The commander who announced the service, Lieutenant-Colonel Choy Yong Cong, Commanding Officer, 2nd Battalion, Singapore Infantry Regiment (2 SIR), said on the Singapore Army Facebook page then that the service would enable servicemen to travel to and from camp more conveniently.