Just a month after starting trials of its on-demand bus service in Punggol, ride-hailing firm Grab has expanded the service to neighbouring Sengkang.

GrabShuttle Plus, which allows users to book a shuttle bus between any two bus stops in a particular area, was introduced in Sengkang last Friday.

The service, available between 6am and 10pm at $1.20 per ride, now allows users to also travel between Punggol and Sengkang.

The service's app had been downloaded more than 27,000 times, he added.

Many people are using the service for first-and-last-mile journeys to and from Punggol MRT station, he said, adding that this has helped reduce overall travelling time for users by as much as 10 per cent.

The process of booking a ride from the Sengkang MRT station to Rivervale Plaza was smooth, when The Straits Times tried the GrabShuttle Plus at about 11am last Friday.

The vehicle showed up within 10 minutes of booking and the ride to the destination took less than five minutes.

In contrast, travelling the same distance by public feeder bus would take about 10 minutes, with a waiting time of about 15 minutes.

Still, some Sengkang residents had reservations about the service.

Ms Nur Abdullah, a 32-year-old teacher, noted that the service is more expensive than a feeder bus, where fares are capped at 77 cents per ride.

The introduction of GrabShuttle Plus comes after the Land Transport Authority (LTA) announced in August that it would begin trials of "on-demand, dynamically routed" bus services in the second half of next year, starting in areas with low demand during off-peak hours. 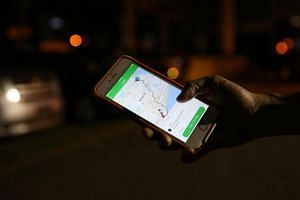 The LTA had highlighted two routes in Punggol as possible areas for the trial.

Grab had previously told ST that it is taking part in a tender for the LTA's on-demand buses and that its GrabShuttle Plus trial would help it "garner insights to deliver a superior service, if selected".

Grab has launched several new services this year, expanding its business beyond the taxi and private-hire cars sector.

In March, it launched GrabShuttle, a collaboration with the Government Technology Agency of Singapore. Unlike GrabShuttle Plus, GrabShuttle operates only on fixed routes and timings.

In August, Grab announced plans to expand its GrabPay electronic payment platform to 1,000 brick-and-mortar merchants by the end of this year.