SINGAPORE - The proposed alignment of the new Cross Island Line, which could run through the Central Catchment Nature Reserve, has sparked heated debate.

The 50km MRT line, which will link Changi and Jurong when it is completed by 2030, was first announced in early 2013.

Here's a look at what the controversy is about.

1. When was the plan announced?

Cross Island Line is most ambitious yet

Singapore is embarking on its most ambitious MRT project yet: the 50km Cross Island Line (CRL), expected to be ready by 2030.

While it is not the longest line here - that is the 57km East-West Line - it could be the first in Singapore to have trains with more than six carriages.

The Land Transport Authority (LTA) would not confirm this, merely saying that the CRL will be “a heavy-load system”.

The CRL will also pass through densely built up areas such as Sin Ming, Ang Mo Kio, Hougang and Clementi.

2. Why are the nature groups worried?

While the Cross Island Line is expected to be ready only in 2030, studies will start at the end of this year to plan for Singapore's most ambitious MRT project yet. 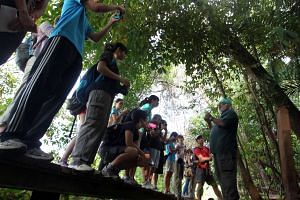 The 50km line runs from Tampines to Jurong, passing through densely built-up areas such as Sin Ming, Hougang, Clementi, and beneath the Central Catchment Nature Reserve.

The LTA is planning well ahead of time because contractors will need to dig deeper underground in land-scarce Singapore for new rail projects.

That would help reduce the damage to the reserve's ecosystem, the Nature Society (Singapore) suggested in a 40-page paper giving its take on the new line.

The position paper, released yesterday, also described the environmental damage that may be caused by the soil investigations and tunnelling needed for the 50km MRT project, which is expected to be ready in 2030.

3. What did the LTA do to address these concerns?

Cross Island Line: Impact on nature to be studied

A study to investigate the environmental impact of the Cross Island Line (CRL) on Singapore's largest nature reserve will begin next year.

The Land Transport Authority (LTA) yesterday said it will call a tender in the first quarter of next year for the assessment, which will help it decide if this MRT line should pass through the Central Catchment Nature Reserve or skirt around it.

Apart from investigating the impact of possible alignments, the consultant will also have to suggest how to reduce any possible negative impact and come up with guidelines on suitable ways to carry out works such as soil investigation in the reserve.

A global environmental consultancy has clinched a $2 million job to find out the impact that a future MRT line might have on the Central Catchment Nature Reserve.

Environmental Resources Management (ERM), which has offices in 40 countries, will start immediately on an environmental impact assessment of the Cross Island Line, slated to serve several areas including Bukit Timah and Ang Mo Kio.

Going by the proposed alignment, the 50km line that stretches from Changi to Jurong will cut through a southern tip of the nature reserve.

4. What is the outcome of the study?

Tests to see how a train tunnel through Singapore's largest and most important nature reserve can be built have been slated for the third quarter.

The impact on the animals and plants around the test sites can be kept to "moderate" levels, said the Land Transport Authority (LTA) yesterday without going into detail, citing the findings of an independent environmental study.

The study suggested several strategies to mitigate the impact to flora and fauna, including the use of enclosures to reduce engine noise, and tanks to collect discharge.

5. Where can I find the full report of the study?

The report was open to the public, but to get information on a new environment impact assessment (EIA) for an upcoming MRT line, people had to make their way to the Land Transport Authority's Hampshire Road premises to read the 1,000-page hard copy, with no photography allowed.

Yesterday, after complaints that it was too difficult to access the study, which looked at the potential impact of soil works for the Cross Island Line if it cut through the Central Catchment Nature Reserve, the Land Transport Authority (LTA) put it online.

"In response to feedback, LTA has made the EIA report available online for interested parties who are unable to come to LTA to view the documents," the authority said in a Facebook post yesterday.

6. Are the nature groups happy with the findings?

Renewing calls for the Government to rethink possible plans to build an MRT tunnel under Singapore's largest nature reserve, several green groups are banding together to ensure their message gets across loud and clear.

Next month, the Love Our MacRitchie Forest volunteer group and the Herpetological Society of Singapore are among those hoping to raise awareness about the issue through a "March for MacRitchie" campaign.

The moves come even as engineers say that contractors have the tools to moderate harmful impacts on the environment.

7. How do the residents in the area feel?

Even as green groups lobby for the Cross Island Line (CRL) to be built around Singapore's largest nature reserve instead of cutting through it, residents are worried about the impact this will have on their homes and lives.

The proposed 9km option, which skirts the Central Catchment Nature Reserve, will run beneath a swathe of private homes near Upper Thomson Road, such as Windsor Park and Yew Lian Park. It then turns west under Lornie Road before heading northwards, parallel to the Pan-Island Expressway.

The Land Transport Authority (LTA) has said that it is studying both alignments for the CRL, a 50km line connecting Changi to Jurong and expected to open in 2030.

8. What are some other views on this issue?

The proposed alignment of the new Cross Island Line, which could run through the Central Catchment Nature Reserve, has sparked heated debate.

While we must do what we can to preserve our natural heritage, we should not shy away from taking hard decisions, if necessary. That has been the pragmatism Singapore prides itself on.

But is building an MRT line under Singapore's largest nature reserve necessary?

How much do we value our forests, and are they worth protecting?

"Not really, there is nothing to see in our forests... so I would say, build away," a banker friend told me. Another added that to get his nature fix, there are far better alternatives overseas.

These are typical answers I get when I ask laymen about the possibility of the Cross Island Line tunnelling under Singapore's largest nature reserve.

9. What's LTA's response to these views?

The alternative alignment that routes the Cross Island Line (CRL) around the Central Catchment Nature Reserve (CCNR) could add about $2 billion to the rail project, the Land Transport Authority (LTA) has revealed.

This 9km-long "skirting alignment" will require longer tunnels and extra ventilation facilities, it said, compared with the 4km direct route, of which 2km will cut through Singapore's largest nature reserve.

Both possible alignments for Cross Island Line will be studied

We thank all writers who have shared their views on the two possible alignments of the Cross Island MRT Line (CRL).

The Government is studying both underground alignments, and no decision has been taken yet.

For the 4km direct alignment, 2km of the tunnel will be below the Central Catchment Nature Reserve (CCNR), while the other 2km is located outside it.