SINGAPORE - As the debate over the Cross Island Line (CRL) rumbles on, Transport Minister Khaw Boon Wan told Parliament on Monday (Feb 29) that the line will form an important part of Singapore's rail network.

Mr Khaw also revealed the number of stations and the expected number of trips commuters will make on it daily.

More environmental and engineering studies, which may take two years, must be done before a decision can be made on which of the two proposed alignments will be chosen, he added.

The two options - one will have a 2km stretch tunnel under the Central Catchment Nature Reserve, with the other skirting the reserve but adding an estimated $2 billion in costs - have split public opinion.

Home and business owners in central Singapore are concerned of being affected, while green groups have been lobbying hard for Singapore's wildlife and nature to be preserved.

Here are 12 questions about the MRT line answered.

1. When was it announced?

The Cross Island Line, which will be the eighth MRT line in Singapore, was announced in January 2013.

It was the most ambitious part of a plan to almost double Singapore's rail network by 2030, and to place eight out of 10 households within a 10-minute walk of a train station.

The Jurong Region Line and extensions to the Circle Line, North-East Line and Downtown Line were also announced at the same time. 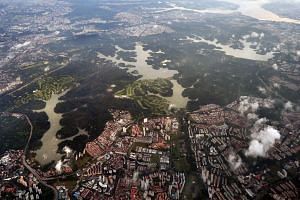 Cross Island Line to have about 30 stations, with 600,000 trips made daily: Khaw

2. When is it expected to be ready?

The Cross Island Line will provide commuters with an alternative to the current East-West Line. It will also complement the Circle Line by being a "key transfer line" linking to other major MRT lines.

It is a 50km MRT line that will span Jurong to Changi.

5. How many stations will it have?

There will be 30 stations, with nearly half of them interchanges.

6. How many trips will it make daily?

Commuters will make at least 600,000 trips on the CRL everyday, according to Mr Khaw. Its capacity and usage will far exceed that of the of the existing North-East Line.

7. Which main areas will it serve?

The exact locations for the stations have not been determined. 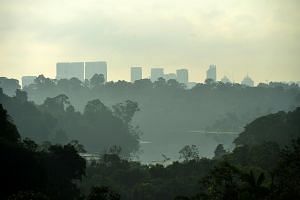 8. What other new features will the CRL have?

Unlike current MRT lines, it is understood that trains plying the CRL are likely to have more carriages - eight cars each, or more. Current lines have three- to six-car trains.

The line will also be the first to have "scalable platforms, which can be expanded to allow the operator to add more cars per train as ridership picks up.

Express services are also being considered, which would cut end-to-end travel time.

9. What other MRT lines will it link?

It will have interchanges at all existing radial lines so it will relieve loads on these systems - in particular the North-East and East-West lines.

Radial lines are train routes linking the city with the suburbs.

10. What is the expected cost?

The total cost is yet to be determined. A 9km-long alternative alignment, which does not go through the Central Catchment Nature Reserve, could add about $2 billion to the project, LTA said.

Mr Khaw also warned in Parliament that the longer route around the reserve will incur an extra travel time of six minutes, compared to the more direct 4km route that will go under the nature reserve.

11. What are the two routes being considered?

* The Direct alignment involves building a 2km tunnel approximately 40m deep beneath the nature reserve's MacRitchie area. There will be no physical structure on the surface level. 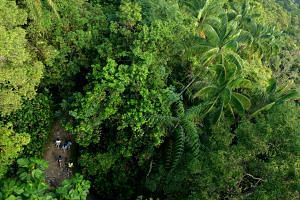 From The Straits Times Archives: All you need to know about the Cross Island Line

Preliminary plans showed it cutting under primary and secondary forests in the nature reserve near MacRitchie Reservoir.

The nature reserve is Singapore's largest patch of primary rainforest. It is home to at least 413 species of plants, 218 species of birds, 30 mammals, 24 freshwater fish species, and 17 species of amphibians.

* The Skirting alignment is a 9km route that skirts south of the reserve, and will go under homes and businesses, with supporting ventilation facilities on the surface level.

The second option will increase end-to-end travel time by about four minutes and may entail land acquisition.

It will run beneath a swathe of private homes near Upper Thomson Road, such as Windsor Park and Yew Lian Park. It then turns west under Lornie Road before heading northwards, parallel to the Pan-Island Expressway.

12. What does the Environmental Impact Study say?

As the line will affect the nature reserve, a global environmental consultancy was hired to assess the environmental impact of constructing it. The study began in July 2014, and the portion released in early February 2016 is Phase 1 of the study.

Phase 1 evaluates the impact of planned soil investigation works. These works are required to help the LTA determine if the ground is suitable for tunnel construction.

The study has found that there will be "moderate" impact on the nature reserve if mitigating measures, such as the use of enclosures to reduce engine noise and tanks to collect discharge, are effectively carried out.

For the alternative route around the reserve, the impact of soil investigation works along Lornie Road was deemed to be "negligible", and "minor" for areas near Venus Drive and a golf course.

The 1,000-page environmental impact assessment report is available for viewing online at the LTA's website.

Phase 2 of the study, to be completed by the end of this year, will look at the environmental impact of the construction and operation of the MRT line for the different possible alignments in or around the nature reserve.