Carparks and roads currently make up more than 10 per cent of Singapore's land area. But if Singaporeans reduce their reliance on cars as a mode of transport, half of this land can be taken back to serve other commuters, Transport Minister Khaw Boon Wan said yesterday.

"For instance, we can make pedestrian paths wider, or construct dedicated lanes for cyclists," he said.

Mr Khaw was speaking at a focus group discussion organised by Chinese daily Lianhe Zaobao at Singapore Press Holdings' News Centre, attended by about 50 readers who formed groups to share their ideas.

The session focused on how walking, cycling and riding can be made the preferred ways to travel, which is one of the three broad themes in the Land Transport Authority's (LTA's) Land Transport Master Plan 2040 released in September.

Other themes touch on how these modes of transport can make commuting easier and more inclusive, and how the land transport system can improve the quality of life.

A 15-member advisory panel on the master plan, chaired by Dr Janil Puthucheary, Senior Minister of State for Transport, will consider public views, deliberate on the various issues and give its recommendations early next year.

The LTA hopes to get the public's input as users of the transport system are the ones who will be the most directly affected by these plans, said Mr Khaw. He also acknowledged that there is room for improvement when it comes to reducing the reliance on cars here. 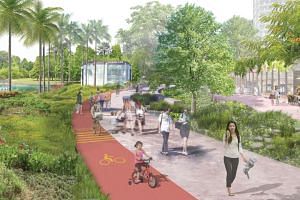 Cycling towards a car-lite society

"For instance, in cities like Copenhagen and Amsterdam, traffic signals prioritise the flow of bicycles over cars at intersections. We seem to give more priority to cars here, and both sides need to come to a compromise if we aim to strike a balance on these issues in the future."

Participants raised a number of suggestions, from providing covered walkways in private estates to using apps that can help commuters predict waiting times for buses and better plan their routes.

If an incident occurs, a witness can then use an app or go to a website to report it. "I hope the suggestions and feedback that have been raised at this session can go into a white paper to be submitted to the authorities, so that it can lead to more concrete outcomes," said Mr Tay, who works in finance.

The LTA will hold other focus group discussions up to January. People can share their views by taking part in electronic polls or using a response form in the public consultation document until Dec 31.

A version of this article appeared in the print edition of The Sunday Times on November 25, 2018, with the headline 'Cut car use and free land for other commuters: Khaw'. Subscribe
Topics:
More
Whatsapp Linkedin FB Messenger Telegram Reddit WeChat Pinterest Print Purchase Article Copy permalink