SINGAPORE - Forty members of the public put on their thinking caps as "transport planners" on Saturday (Oct 27) to discuss ways to make Singapore's car-lite dream possible.

During the four-hour session, the first of three focus group discussions that the Land Transport Authority (LTA) is holding on its next transport masterplan, the participants played a board game to plan commuting routes and options.

The aim of the game designed by the LTA is to help people see the trade-offs in planning a land transport system given a limited budget, as well as understand the different preferences of commuters.

Saturday's session was focused on how walking, cycling and riding can be made the preferred way to travel, which is one of the three broad themes laid out in the Land Transport Master Plan 2040 released last month.

Another two focus group discussions will be held in November on the other two topics - how to make walking, cycling and riding easier and more inclusive, and how the land transport system can improve the quality of life.

Speaking to the media on the sidelines of the event, Dr Janil Puthucheary, Senior Minister of State for Transport, said a key takeaway from the session was that people will take public transport if it is easy and convenient for them to use.

"They are willing to think about enjoyment second, as long as we make it easy for them," he said. 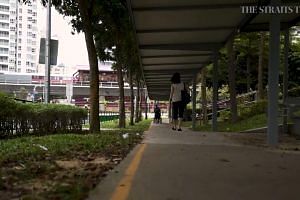 Cycling towards a car-lite society

One interesting observation, he added, was that people are willing to have a slightly longer commute if it is productive or enjoyable.

"If they are commuting for leisure on the weekends, they see that as separate from going for work," said Dr Janil, who is also chairman of the Land Transport Master Plan Advisory Panel.

LTA is working with government feedback unit Reach to gather views on the future of land transport from more Singaporeans in different parts of the country until next month.

Members of the public can also provide feedback online through an electronic poll and the public consultation document on LTA's website until Dec 31.

So far, about 2,000 people have come forward to give their views.

The 15-member advisory panel headed by Dr Janil will take in the views gathered in the process before submitting a set of recommendations to the Government by early next year.