Margin before tax, interest and depreciation improved to 22.6 per cent, from 22 per cent in the same quarter last year.

The firm has declared an interim dividend of 4.5 cents, up from 4.35 cents last year.

Chief executive Yang Ban Seng said: "Despite an intensely competitive operating environment and growing global economic uncertainty, we continued to grow the business in the second quarter of this year. 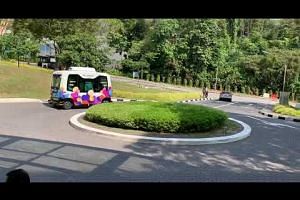 ComfortDelGro's self-driving shuttles to start picking up passengers at NUS

"This was largely due to the strong contributions from the new businesses that we acquired last year and robust growth of the public transport services business."

"Whilst not immediately profit-accretive, these strategic tie-ups are crucial in ensuring that we position ourselves for the future," he noted.