While legend has it that this island was named Singapura after Sang Nila Utama spotted a large feline here, it is just one of many historical interpretations of how the Lion City (Singapura in Sanskrit) got its name.

Speaking at a public lecture yesterday, historian Peter Borschberg of the National University of Singapore's (NUS) history department said the toponym Singapura and its many variants "have been taken apart and understood in different ways during the pre-modern period". A toponym is a geographic place name.

"The Lion City is only one of several interpretations," said Dr Borschberg, who has been studying European records of the region for the past 20 years.

Singapura, as explained by some Portuguese authors in the 16th century, is translated from its original language in Malay into Portuguese as falsa demora, which means the wrong or tricky place to stay.

Meanwhile, the name Barxingapara, which appeared in maps in the early 1500s, can be broken down as follows: "bar" means a kingdom of a coastal region, "xin" means "China" and "gopara" or "gapura" is the word for "gateway".

Dr Borschberg's talk is part of the ongoing Nalanda-Sriwijaya Centre's lecture series called 1819 and Before: Singapore's Pasts, organised in the lead-up to the bicentennial next year. The first lecture in the series took place in July.

Dates are being firmed up for the next two lectures, which will cover terrestrial and marine archaeology in Singapore. 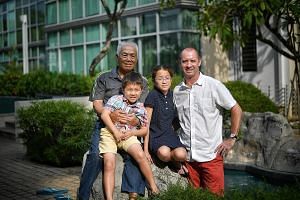 Present conditions can influence how we see past

A future built on Pulau Tekong's past

NUS historian Kwa Chong Guan, who moderated yesterday's event, said that one conclusion that can be drawn from the talk is that the history of Singapore, prior to Sir Stamford Raffles' arrival in 1819, centred more on waterways and the contests for them.

"If we frame Singapore's history in that context, we may get a better understanding of our past," he said.

Dr Borschberg said these varied understandings from the pre-modern era show that Singapore was "clearly recognised as an important point of transition between two maritime zones".

He said he had seen about 1,000 references to the toponym written in languages such as Portuguese, Spanish and Dutch, mostly from the maritime perspective and referring to the waters around Singapore.

He highlighted the writings of Flemish gem trader Jacques de Coutre, who passed by Singapore on several occasions around 1600. One of De Coutre's memorials contains a detailed plan to build fortresses on and around Singapore. These proposals were written two centuries before Raffles arrived.

In an earlier publication, Dr Borschberg suggested that this proposal "calls into question the long-held view that Raffles was a specially gifted person with a unique vision for Singapore Island".

Mr Choo Lip Sin, 48, director of heritage trails with the civic group My Community, said the lecture "provides a clear overview of the jigsaw puzzle Dr Borschberg has been piecing together over the years to plug a vacuum in history between the 14th and 19th centuries".

A version of this article appeared in the print edition of The Straits Times on October 10, 2018, with the headline 'S'pore once named as 'tricky place to stay''. Subscribe
Topics:
More
Whatsapp Linkedin FB Messenger Telegram Reddit WeChat Pinterest Print Purchase Article Copy permalink