The number of drink-driving arrests dropped by 3.7 per cent to 2,002 persons last year, despite an increase in the number of enforcement operations conducted.

Another concerning trend is in the area of accidents involving motorcyclists.

Likewise, motorcyclist and pillion rider fatalities rose by 38.6 per cent to 61 last year, from 44 in 2017. These deaths accounted for almost half of all road traffic fatalities last year. 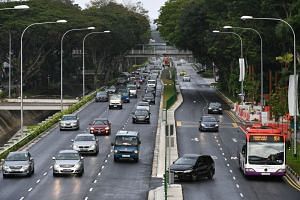 Accidents resulting in injuries where motorcyclists were involved increased by 2.1 per cent to 4,358 cases last year, from 4,270 in 2017.

Overall, the road traffic fatality rate per 100,000 population rose slightly from 2.16 to 2.2 last year, reversing a gradual decline seen since 2010.

But accidents resulting in injuries dropped slightly by 0.5 per cent to 7,690 cases last year, from 7,726 in 2017, according to the statistics, which showed bright sparks in some areas.

The number of speeding-related accidents dipped by 5.6 per cent to 719 cases last year, while speeding violations detected also dropped by 5 per cent to 156,157.

The number of accidents involving elderly pedestrians dropped by 6.2 per cent to 259 last year, from 276 in 2017. Elderly pedestrian fatalities also dipped marginally from 26 in 2017 to 25 last year.

But Traffic Police (TP) Commander, Senior Assistant Commissioner (SAC) Gerald Lim, speaking to the media on the sidelines of an event held at the Road Safety Community Park in East Coast Parkway on Thursday, said elderly pedestrians remain a concern.

Also, the elderly accounted for 62.5 per cent of all pedestrian deaths last year, a spike from 57.8 per cent in 2017. About half of the fatal accidents that the seniors were involved last year was the result of jaywalking.

"The elderly pedestrians' idea of road safety might be 20, 30 years ago when the infrastructures were different," said SAC Lim.

"Now, vehicles travel faster and PMDs (personal mobility devices) are on shared paths. They may not be familiar with these and the speeds at which they can go."

In the last few years, TP, the Singapore Road Safety Council (SRSC) and agencies like the Land Transport Authority have continued to engage elderly pedestrians through education and improvements made to road traffic infrastructures, said SRSC chairman Bernard Tay.

Raising road safety awareness included skits performed by artists at various constituencies, test kits to test an elderly pedestrian's reaction and teaching students safe ways to cross roads with the hope they take home the message of road safety to their grandparents and caregivers.

To inculcate good motoring habits, simulation training will be made compulsory for all learner motorists, including motorcyclists, as it would enable them to experience real-life traffic situations.

TP will also explore introducing defensive riding practical lessons for the motorcycle Class 2B (200cc and below) learner riding curriculum.