SINGAPORE - Irresponsible and reckless motorists may face longer jail terms and have their vehicles seized under proposed changes to the Road Traffic Act (RTA).

Announcing this on Thursday (Feb 21), Ms Sun Xueling, Senior Parliamentary Secretary for Home Affairs (MHA) and National Development, said: “We want to increase the penalties for motorists who drive irresponsibly and cause serious accidents.

“This will deter them and ensure that they receive sentences that are commensurate with the harm they caused.”

With the changes, dangerous driving and careless driving under the RTA will correspond broadly to offences of rash act and negligent act under the Penal Code.

The authorities will consider the manner in which the vehicle was operated, such as whether the motorist was driving at excessively high speeds or manoeuvring his vehicle in very close proximity to other vehicles.

Other factors include whether the motorist was sleep-deprived when driving or was not in a state to drive safely, and whether the situation required the motorist to exercise extra care but he had failed to do so.

Each offence will have four tiers of severity, catering to different levels of harm caused: death; grievous hurt; hurt; and endangering a life.

Those found guilty of dangerous driving could face a maximum jail term of eight years for the first offence, up from the corresponding current penalty of five years.

Offenders will also face a minimum sentence of at least a year, if death or grievous hurt is caused. The jail sentence will be doubled for repeat offenders.

The courts will also be able to impose a minimum disqualification period of eight years if there was death or grievous hurt.

As for careless driving, those convicted may face up to three years’ jail for the first offence, with sentences for repeat offenders doubled.

This is up from the current jail term of a maximum of six months for first-time offenders. 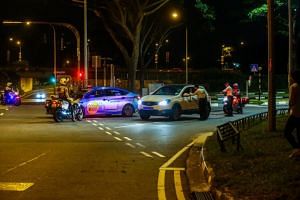 “The basis for higher penalties is that motorists, being in control of a vehicle that they know can potentially cause great harm to other road users, ought to exercise greater care and responsibility,” MHA said in a statement on Thursday.

Motorists found to be under the influence of alcohol or drugs while committing these offences will also face additional penalties.

If the motorist was intoxicated while driving in a dangerous manner, he could face a further two years in jail and potentially be behind bars for 10 years in total.

As for vehicle seizures, current laws only allow this in certain situations, such as illegal racing.

Ms Sun said of the proposed changes: “We think we should be able to forfeit vehicles for more offences. For example, in cases of dangerous driving that cause death or grievous hurt.”

From April 1, the ministry will also be raising the composition fine sums for road traffic offences involving motorists, pedestrians and cyclists.

For motorists, these include illegal U-turns; the use of mobile devices while driving; speeding; and running red lights.

Ms Sun said the last time the fines were reviewed was about 20 years ago.

The size of the fine will be determined by the seriousness of the offence and also the type of vehicle used.

The ministry’s move to strengthen deterrence against irresponsible driving behaviour comes amid a growing number of public feedback on such cases in recent years.

Between 2014 and last year, the number of feedback submitted by the public to the Traffic Police (TP) on irresponsible driving more than doubled, from 6,900 to 18,500.

There were 22 per cent fewer fatal accidents last year, compared with 2014. Similarly, the number of accidents resulting in injury dipped 3.6 per cent during the same period.

MHA has invited the public to submit feedback on the proposed Amendments to the RTA, which can be seen on REACH, the Government’s feedback portal.