SINGAPORE - The grieving mother of the Singaporean who fell to his death while training for a competitive climb on Mount Kinabalu said he was a filial son.

Avid runner Woon Tai Kiang, 36, is believed to have fallen 150m into a ravine after slipping off the trail last Saturday (Oct 1), before succumbing to his head injuries.

He was training for the Mount Kinabalu International Climbathon to be held on Oct 16.

"He was a filial son, and was good to us," said Mr Woon's mother, trying to hold back her tears when speaking to The Straits Times at their Bedok North home yesterday. "I told him not to keep going overseas to climb, but he wanted to."

The 69-year-old, who declined to give her name, said her elder son, who is four years older than Mr Woon, made his way to Sabah on Monday morning to join Mr Woon's girlfriend, who has been there since Sunday evening.

The Straits Times understands that his body is now on its way back to Singapore.

Mr Woon is believed to be training alone at the time of the incident.

Singaporean who fell on Mt Kinabalu 'died doing what he loved' 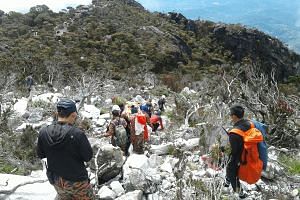 Singaporean dies after falling into ravine on Mount Kinabalu

It was not his first time attempting the climbathon, deemed as one of the world's toughest mountain races.

Athletes who have participated in past versions of the climbathon said it is ordinary for them to train solo on the mountain in Sabah.

Filipino Nina Dacanay, 36, who has done the climbathon five times, said the race attracts seasoned athletes from around the world.

"There are athletes who prefer to train on their own to be able to simulate their speed and performance on race day. Due to the quality of participants, solo training is allowed."

Mr Woon, who weighed 100kg at one point, started running three years ago to get in shape. His friends said he was a former manager with the Singapore National Employers Federation.

He soon fell in love with the sport and even participated in running competitions locally and overseas, in countries such as Malaysia, the Philippines and Switzerland.

Athletes in the running community remember Mr Woon as an avid runner who would put in the hours to improve. Outside of running, he was a cheerful and loyal friend.

A memorial T-shirt designed to remember Mr Woon has since received more than 40 interested buyers, mostly from the ultra-running community. The proceeds will go towards assisting Mr Woon's family.

Some friends will also be dedicating their next races to Mr Woon.

Among them is middle-distance athlete Marcus Ong, 30, who will run a 10km race this Sunday in his memory. Mr Ong said: "He often wore a smile on his face, regardless whether it was a good or bad race."

Fellow runner Carlo Bacalla still cannot believe that his friend is gone. They had planned a few runs to complete together.

He said Mr Woon was passionate about the sport. "He just can't let a month or two pass without doing an ultramarathon," he added. "He died doing what he loved."