A $300,000 seed fund to boost women's development programmes will kick off by supporting those that advocate or address employment and health issues for one year.

The Seeds of Change Fund will run for three years, with $100,000 set aside for this year. Women's organisations will have six months to apply for funding to pilot or scale up their projects in those two areas.

Details of the government fund, first announced in Parliament earlier this month, were disclosed yesterday by the Singapore Council of Women's Organisations (SCWO), which will be administering it.

She noted that women here have been breaking boundaries in male-dominated industries such as science, technology and the uniformed services.

"Yet there is still much more that can be done to support women in reaching their full potential... I look forward to this seed fund further enabling positive changes for women," said President Halimah, a Hall of Fame member since 2014. 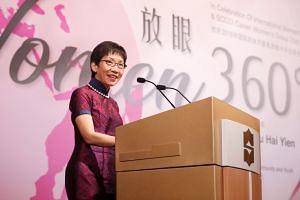 SCWO president June Goh said that besides funding, organisations that require guidance can get it from the NTUC Women and Family Unit and People's Association's Women's Integration Network.

Successful fund applicants will receive up to $20,000, or 90 per cent of the allowable project deficit, whichever is lower, on a reimbursement basis. Projects of a larger scale and greater impact, however, may be considered for higher funding support.

For the first year, the fund is open only to the SCWO's more than 50 member organisations, which reach out to some 500,000 women.

Senior Parliamentary Secretary for Social and Family Development Faishal Ibrahim said juggling work and family can come at the expense of health and there should be more "pathways for women to go back to work and opportunities for women to do better in employment".

This year's induction ceremony at The St Regis hotel, organised by the SCWO to mark International Women's Day, will bring the total number of women honoured for their contributions to 160.

Mrs Barnabas, who was part of the "golden generation" of track and field athletes who won numerous medals for Singapore in the 1960s and 1970s, said she was shocked to receive such recognition decades later. She famously won the 200m race at the 1973 South-east Asian Peninsular Games held here.

There was little fanfare for female athletes back then, said Mrs Barnabas, 77, a retired schoolteacher.

"We had to train on grass and cinder tracks. There were no sponsorships so we had to buy our own spike shoes. I think the athletes today are much more blessed than us, which I am glad for."

A version of this article appeared in the print edition of The Sunday Times on March 24, 2019, with the headline 'Seed fund for women to kick off with health, employment focus'. Subscribe
Topics:
More
Whatsapp Linkedin FB Messenger Telegram Reddit WeChat Pinterest Print Purchase Article Copy permalink